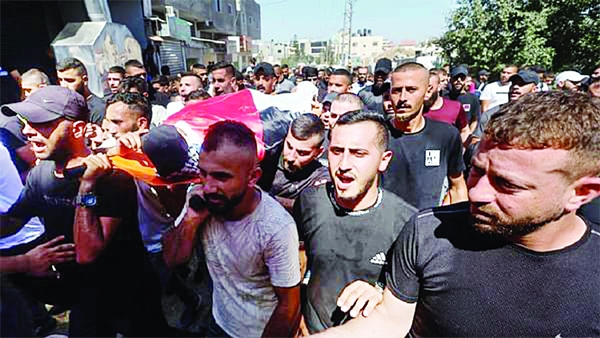 Mourners carry the body of Palestinian gunman Abdulrahman Khazem, who was killed by Israeli forces in a raid, during his funeral in Jenin in the Israeli-occupied West Bank on Wednesday.

AFP :
An Israeli raid targeting Palestinian armed groups in a West Bank flashpoint killed four Palestinians on Wednesday, including the brother of a man blamed for a deadly attack in Tel Aviv.
The violence was the latest to hit Jenin, in the north of the Israeli-occupied West Bank, an area that has seen near daily clashes between Israeli troops and Palestinian gunmen since an escalation that began in March.
The Palestinian health ministry recorded four dead and 44 wounded by live fire in the latest Israeli operation.
Among them was Abed Hazem, whose brother Raad was named as the killer of three Israelis in a shooting spree in Tel Aviv's busy nightlife district in April.
Raad Hazem was shot dead after a massive Israeli manhunt. Israeli forces have been pursuing Abed and Raad's father Fathi for months.
The army only immediately confirmed two deaths during an operation it said targeted "two suspects involved in a number of recent shooting attacks."
"While surrounding the residence in which both suspects were located, an explosive device detonated and the suspects opened fire toward the security forces. The security forces fired back according to standard operating procedures and the two suspects were both killed," the army statement said, confirming Hazem as one of the men killed.
Since March, Israel has launched hundreds of operations in the northern West Bank, including in Jenin and nearby Nablus, in pursuit of alleged militants.
The raids have sparked clashes that have killed dozens of Palestinians, including fighters.
Israel has occupied the West Bank since the Six-Day War of 1967 but parts of the territory are nominally controlled by the Palestinian Authority, in accordance with terms set out in the 1994 Oslo peace accords.
Analysts have warned that the dramatic rise in Israeli West Bank raids is further weakening the unpopular Palestinian Authority, with Palestinians increasingly condemning president Mahmud Abbas's administration for its security cooperation with Israel.
Following the latest Jenin unrest, Abbas's spokesman, Nabil Abu Rudeina, accused Israel of "tampering with security and stability through pursuing a policy of escalation," in a statement published by the official Palestinian news agency, Wafa.
Israel has demanded that the PA security forces do more to crack down on alleged militants, and Prime Minister Yair Lapid vowed earlier this month that he would "not hesitate to act in any place that the Palestinian Authority does not maintain order."