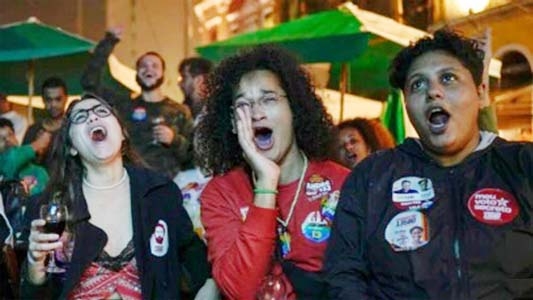 BSS :
Far-right incumbent Jair Bolsonaro and leftist front-runner Luiz Inacio Lula da Silva traded heated attacksÂ  on Thursday in a final debate three days from Brazil's presidential election, accusing each other of corruption, nepotism and lying.
Trailing in the polls ahead of Sunday's polarizing vote, Bolsonaro wasted no time going for the jugular, calling Lula a "liar, ex-inmate and traitor."
Seeking to deliver a knockout punch and win the election in the first round, Lula, the charismatic but tarnished ex-president who led Brazil from 2003 to 2010, responded in kind.
"It's ugly for the president of the republic to blatantly lie all the time...
That's why the people are going to send you packing," the ex-metalworker said in his trademark gravelly voice.
He told Bolsonaro to "look in the mirror" if he wanted to see corruption, citing graft allegations against the president's senator son Flavio and ex- education minister, accused of demanding kickbacks for influential evangelical churches.
The moderator, journalist William Bonner, reprimanded both candidates for failing to respect the ground rules, and had his work cut out for him in an unruly, heated debate that also featured five other candidates trailing far behind in the polls.
AFP fact-checkers identified numerous falsehoods in the candidates' statements, such as when Bolsonaro tried to fend off accusations he dragged his feet on purchasing Covid-19 vaccines.
"No country in the world purchased vaccines in 2020," he said. In reality, millions of doses of Covid-19 vaccines were administered around the world that year. Earlier Thursday, a poll by the Datafolha institute showed Lula maintaining a 14-point lead over Bolsonaro, 48 percent to 34 percent.
Excluding voters who said they planned to cast blank or spoiled ballots, Lula's support reached 50 percent. That put him on the cusp of the score needed to win outright and avoid a runoff on October 30: 50 percent of valid votes, plus one.
Bolsonaro, who is fond of saying the only reliable polls are "on the street" -- where the 67-year-old incumbent regularly rallies his die-hard supporters en masse -- is counting on his evangelical and business-centric base to pullÂ  through.
Lula -- who presided over an economic boom, leaving office with an unprecedented approval rating of 87 percent -- is meanwhile appealing to poor, minority and anti-Bolsonaro voters.
The 76-year-old is seeking a remarkable political comeback just four years after being jailed on controversial corruption convictions stemming from a massive scandal centered on state-run oil giant Petrobras.
Freed pending appeal in 2019 after 18 months behind bars, Lula regained his eligibility to run for office when the Supreme Court annulled his convictions last year, finding the lead judge in the case was biased.
The late-night debate on TV Globo, the most-watched broadcaster in Brazil, was the last chance for candidates to sway undecided voters.
Bolsonaro's camp had said he would come out swinging, attacking Lula on the corruption issue and pressing home his conservative values on issues of religion and abortion. "This is the debate that can change the picture," a Bolsonaro campaign member told AFP on condition of anonymity.
After the first debate, a month ago, Lula was criticized for seemingly evading the corruption question. He opted not to take part in another debate, last Saturday. Lula has urged Brazilians loyal to any of the minority candidates to rather cast a "tactical" vote for him, and against Bolsonaro.
The incumbent president got a celebrity boost Thursday for his re-election bid from football superstar Neymar, who posted a video on TikTok of himself dancing to a pro-Bolsonaro campaign song. Grinning, the Paris Saint-Germain and Brazil striker, arguably Brazil's most famous celebrity, flashed the number 22 with his fingers -- Bolsonaro's candidate number -- as he rocked out to the electronic dance jingle.
The broadcast election campaign in Brazil ends at midnight on Thursday, although in-person events and distribution of election material will be allowed until Saturday night.
Datafolha will bring out another, final poll on Saturday, the eve of the first round. Bolsonaro has repeatedly hinted he would challenge a Lula victory, saying last weekend: "We are the majority. We will win in the first round."