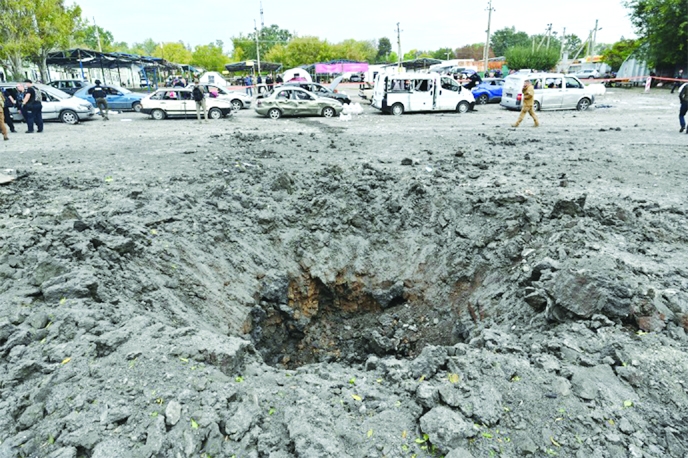 A crater left by a missile strike that hit a convoy of civilian vehicles in Zaporizhzhia, Ukraine on Friday.

Al Jazeera :
A Russian missile attack on Zaporizhzhia killed at least 25 people in a humanitarian convoy and wounded dozens others, a Ukrainian official said.
A Russian official blamed Ukrainian forces for the deadly strike.
The convoy of civilian vehicles had assembled on the city's edge on Friday, preparing to leave the area. They were planning to visit relatives and deliver supplies in an area controlled by Russia when it was hit.
The impact blew out car windows and vehicles were punctured by shrapnel, a witness said.
Andriy Yermak, head of President Volodymyr Zelenskyy's office, said 25 had been killed and 50 were wounded in what he said was an attack by a "terrorist state".
Oleksandr Starukh, Zaporizhzhia's regional governor, posted images of burned-out vehicles and bodies lying on the road.
Police Colonel Sergey Ujryumov, head of the explosive disposal unit of the Zaporizhzhia police department, said Russian-made S-300 missiles were used in the attack.
"The people who were hit were mostly in their cars or next to them. There were other strikes, more than 10. You will be informed about them later," he told reporters at the scene.
Ujryumov said the Russian military "had the coordinates" of the convoy. "It's not a coincidental strike. It's perfectly deliberate," he said.
However, Vladimir Rogov, an official in the Russian-installed administration in the Zaporizhia region, blamed the attack on Ukrainian forces.
"23 people killed â¦ in Ukrainian strike on convoy of cars at exit to liberated part of Zaporizhzhia region," he wrote on Telegram.
Al Jazeera's Hoda Abdel-Hamid, reporting from the city of Zaporizhzhia, in Ukraine's partially Russian-occupied Zaporizhia region, said the area is well known as a major "transit point".