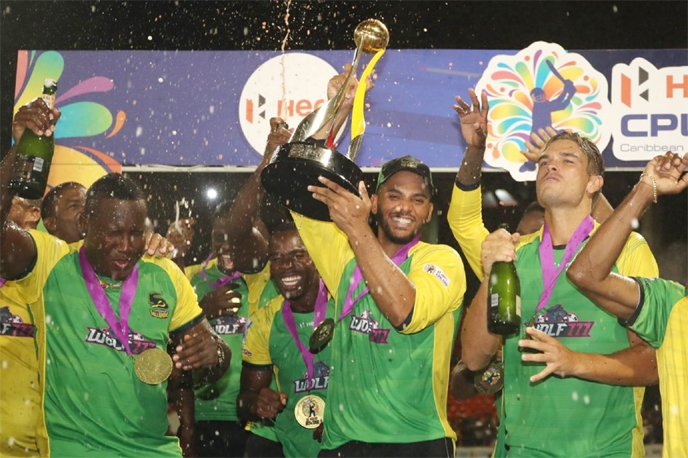 Players of Jamaica Tallawahs celebrate with the trophy after winning the CPL 2022 in Guyana on Friday night.

Agency :
Jamaica Tallawahs became the champions of Caribbean Premier League (CPL) on Friday, defeating Barbados Royals by eight wickets at Providence Stadium, Guyana.
Chasing 162 runs, Brandon King and Shamarh Brooks would produce an 86-run partnership that frustrated the Royal's bowling attack.
Despite Jason Holder taking the wicket of Brooks, King would lead the rest of the chase as he scored a magnificent 83 runs from 50 balls to see the franchise win their third Hero CPL title.
Jamaica Tallawahs suffered an early setback in their chase as opener Kennar Lewis lost his wicket for a duck, but King and Brooks would rebuild at a steady run rate.
Once Brooks lost his wicket in the eleventh over, King would shoulder the responsibility of finishing the chase, hitting fifteenÂ  boundaries in total. In the end, King would take his side to victory with a six.
Barbados Royals had won the toss and chose to bat, with Rahkeem Cornwall and Kyle Mayers getting them off to a blistering start, combining to score 63 runs in the powerplay.
However, Fabian Allen would remove both openers to bring the Tallawahs back into the game, before Azam Khan would continue his fine form with the bat to take the Royals to 161/7.