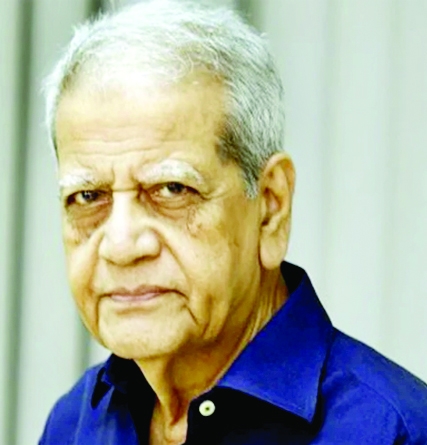 Staff Reporter :
Veteran journalist Toab Khan died on Saturday while undergoing treatment at United Hospital at the age of 87.
He had long been suffering from old age complications.
Family sources said, the late journalist will be buried in the city's Banani graveyard after Asr prayers on Monday.
Meanwhile, Prime Minister Sheikh Hasina expressed her deep shock at the death of Toab Khan. BNP Secretary General Mirza Fakhrul Islam Alamgir also expressed his deep shock at the demise of the veteran journalist.
The body of Toab Khan will be taken to Newsbangla and Dainik Bangla office at Tejgaon at 10:00am on Monday where his first namaz-e-janaza will be held. Then his coffin will be taken to the Central Shaheed Minar where the body of late journalist will be kept from 11:30am to 12:30pm. Tributes will be paid to him under the supervision and management of Sanmilito Sangskritik Jote there.
Later, Toab Khan's body will be kept at the Jatiya Press Club premises from 1:00pm to 1:30pm on Monday. His second namaz-e-janaza will be held there. From Jatiya Press Club, the body will be taken to his Gulshan residence.
The third namaz-e-janaza will be held at Azad Mosque at Gulshan after Asr prayers. Then he will be laid to eternal rest at Banani Graveyard.
Toab Khan was born on April 24, 1934 at village Rasulpur in Satkhira district. He started his journalism career joining the Weekly Janata in 1953. He then joined Dainik Sangbad in 1955. In 1964, he joined the Dainik Pakistan which was renamed as the Dainik Bangla after the independence of the country in 1971. He became the editor of the Dainik Bangla after independence.
He received Ekushey Padak for his outstanding contributions to journalism in 2016.
Toab Khan also served as the Director General of the Press Institute of Bangladesh (PIB).
The veteran journalist also played a role as a strong voice in Swadhin Bangla Betar Kendra to inspire the freedom fighters during the War of Liberation. At that time, he used to broadcast a regular programme called "Pindir Prolap" on Swadhin Bangla Betar Kendra.
He also served as the Advisory Editor of 'Daily Janakantha' and, later, joined as the Editor of 'Danik Bangla'.