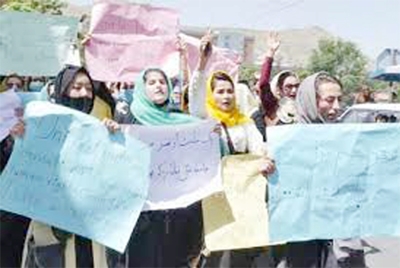 BSS :
More than 100 Afghan girl students rallied in the western city of Herat on Sunday, protesting against a suicide bombing on a Kabul classroom that killed dozens as they prepared for examinations.
On Friday, a bomber blew himself up in the women's section of a gender- segregated study hall in Kabul's Dasht-e-Barchi neighbourhood, an enclave of the historically oppressed Shiite Muslim Hazara community.
Hundreds of students were taking tests training for university admission, and the United Nations said at least 35 were killed and another 82 wounded, with most of the casualties being girls and young women.
On Sunday, more than 100 women -- mostly Hazara -- rallied in Herat against the attack, one of the deadliest to strike the minority in recent years. "Education is our right, genocide is a crime," the protesters chanted, marching from the University of Herat to the provincial governorate.
They were stopped from reaching the governorate by heavily-armed Taliban forces. Taliban returned to power, with demonstrators detained and rallies broken up by aerial firing.
Women activists have still tried to stage sporadic protests, most in Kabul, against a slew of restrictions imposed on them by the Taliban. No group has so far claimed responsibility for Friday's attack at the Kaaj Higher Educational Centre in Kabul.
The jihadist Islamic State (IS) group regards Shiites as heretics and has previously staged attacks in the area targeting girls, schools and mosques.
Hazaras have also been targeted in Herat in recent years. IS has emerged as a key security challenge for the Taliban, but officials insist their forces have defeated the militants.