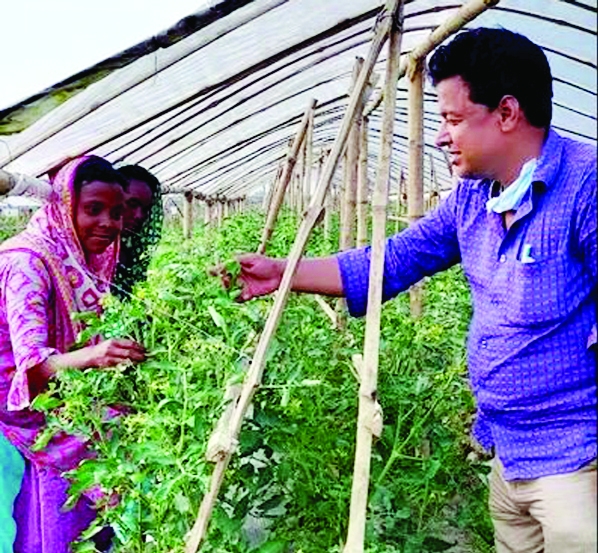 BSS, RajshahiÂ  :
Commercial farming prospect of summer tomato is bright in RajshahiÂ  region, including its vast Barind tract, as many farmers are seen getting lucrative prices from its farming for the last couple of years.
Imam Hossain, 38, a resident of Sonadighi village under Godagari Upazila, had reaped profit of around Tk 80,000 after cultivating the cash crop on seven katha of land last season.
This year, he has cultivated 11,000 plants on around two and a half bigha of land.He's expecting to harvest cherished yield within the next couple of days.
Â "I'm hoping to get around three kilograms of tomato from each of the plants on an average," he said with a smiling face.
Abul Hossain, 45, another farmer of the same village, has brought one bigha of land under the tomato farming this year expecting a better yield and price.
Talking to BSS he said the farmers expend around Tk 40,000 to Tk 50,000 for the cultivation of tomato on one bigha of land on an average and they get Tk 1.5 lakh as output.
"I've earned profit of around Tk 40,000 after farming tomato on five katha of land last year," Monirul Islam, 35, another grower of Dhamila village, said, adding he has cultivated the crop on 18 katha of land this year.
Sub Assistant Agriculture Officer Atanu Sarker told BSS that summer tomato farming has started bringing diversification in the region's cropping system, besides creating scopes of harvesting tomato during the summer and rainy seasons instead of only in the conventional winter season.
The tomato farming appeared as a fortune changer for many farmers as it made many peasants solvent in the region this year besides infusing dynamism into the local economy.
Mozder Hossain, Deputy Director of Department of Agricultural Extension, said acreage of tomato farming has increased remarkably in the region.
Many of the farmers have become successful in this field as summer hybrid tomato is being cultivated in different areas commercially as it is being considered as a profitable crop.
In the last year, thirty more farmers have gained success through farming experimentally.
Â Bangladesh Agriculture Research Institute (BARI) has released three hybrid varieties namely hybrid tomato-4, 8 and 11 for summer season. It has also adopted need-based measures to make the varieties popular among the farmers.
The On Farm Research Division (OFRD) of BARI has been working to boost summer tomato production through expanding its cultivation in the region under the "summer tomato adaptive trial production and community-based pilot production programme" project.
Summer tomato adaptive trial productions and community based pilot production programmes are being carried out in the region. Five production programmes in Rajshahi, three in Natore and one in Chapainawabganj districts are being conducted at present with the project intervention.
A total of 40 farmers were imparted need-based training and they were given inputs, including saplings, fertilizer, pesticide and materials free of cost on behalf of the project.
OFRD Principal Scientific Officer Jagadish Chandra Barman said that the farmers have been selling tomatoes at Taka 80 to 100 per kilogram for the last one month.