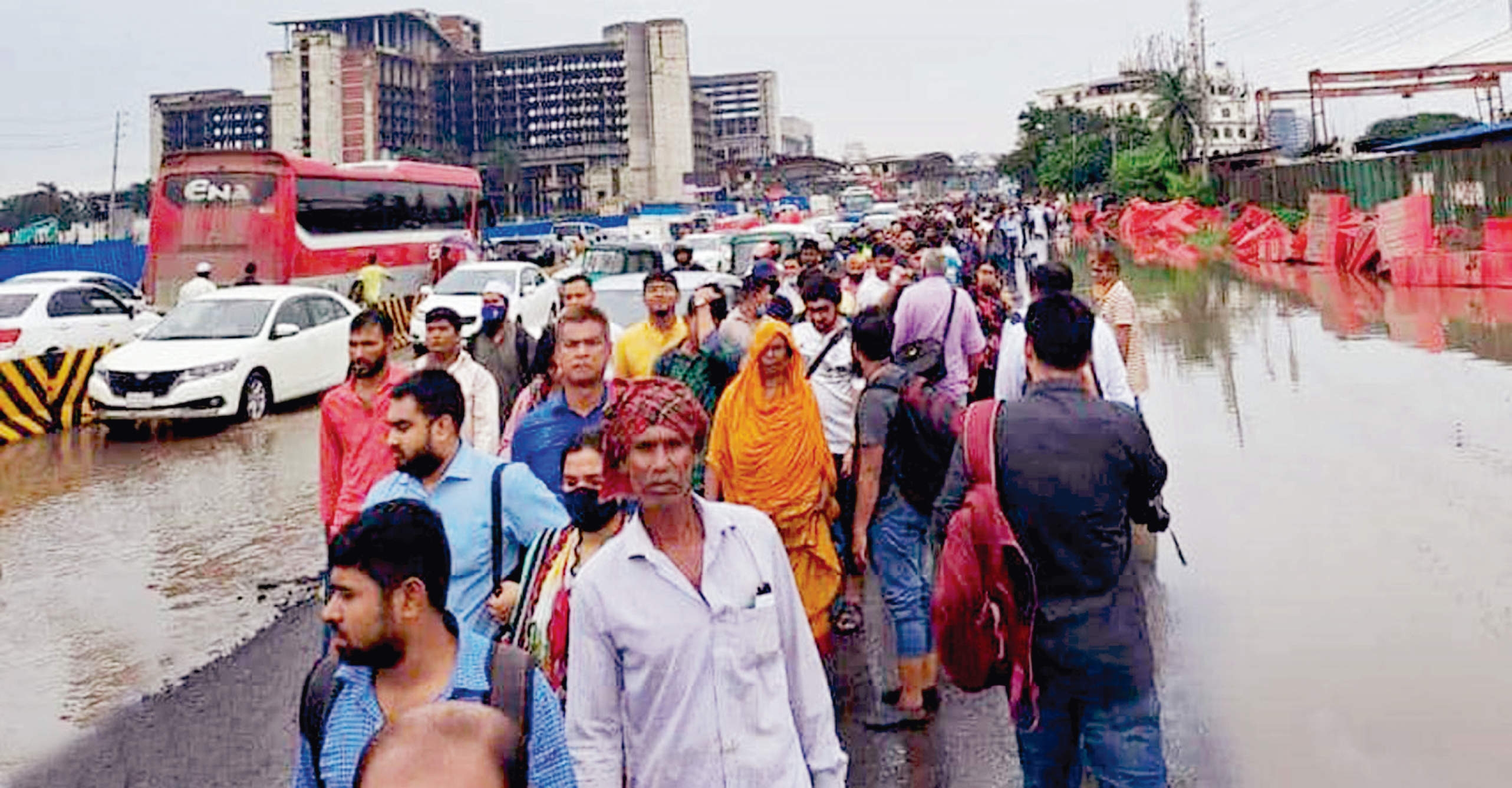 Commuters on Airport Road in Dhaka had to face huge sufferings on Sunday as a tailback of few kilometres was created on the Dhaka-Mymensingh highway. The road was submerged under water due to the incessant rain since morning. NN photo

Staff ReporterÂ  :
Regular accidents and traffic gridlocks are the common phenomena on the 20.5-kilometre Gazipur to Uttara Road due to the Bus Rapid Transit (BRT) project which started some 10 years ago, but the work progress is still around 80 percent.
Every day the commuters from Gazipur to Uttara and vice-versa feel a hellish experience of four to five hours or even more traffic gridlock to reach their destinations because of the undergoing project work.
The situation becomes diabolic when rains submerged most of the project roads and the drivers and pedestrians fell into the traps of ditches here and there caused by the mismanagement of the project work without considering the smooth traffic. Â
People said that the development of any project for the people's benefit was always welcome as it eases their sufferings, but when a project work did not finish even in ten years, it was really excruciating.
They said that they wanted to get rid of the unbearable sufferings every day along this road as it consumed their energy and valuable working hours.
Along with the people, the traffic policemen also become the victims of the sufferings as they have to maintain the traffic flow every day amid this odd situation. The entire traffic system in the area has gone out of their control now due to the bumpy roads covered with ditches and potholes.
The commuters on Sunday again suffered the worst since morning when the rain started at the crack of dawn.
The unbearable traffic congestion is created from Gazipur-Tongi and Abdullahpur to Airport Road since morning amid the downpour.
The rain created water stagnation in different parts of the road and the whole area along the road became muddy, creating immense sufferings for the drivers and the pedestrians.
Even the traffic police suffered badly and at one stage of this unbearable situation they started to pump out the water by shallow machine to remove water for easing the traffic.
Uttara Traffic Division and Crime Division tried to pump out the water from midday to afternoon and brought the traffic movement normal to some extent.
Sources said that the project work has been continuing for 10 years under the supervision of three contractors, but 70 percent work has not been completed yet.
As a result the local people are suffering an unbearable situation years after years.
"Every day I experience the traffic gridlock for hours from Tongi to Airport road. But when it rains the sufferings know no bounds," Md Hasan told this correspondent on Sunday.
Deputy Commissioner of DMP Traffic Uttara Division Nabid Kamal Shoibal said, "Some parts of the roads have gone under water due to rain. The road is full of potholes and ditches due to the project work. "
"When rain comes, the ditches are filled with water. Then the traffic situation goes out of control. Today we have set up a shallow machine to pump out the water to make the traffic situation normal," he added.
Sources said that the BRT project was taken up in November 2012 for completion by December 2016 at a cost of Tk 2,037.9 crore.
But the project got delayed on account of various problems including design, water-logging and four times revision, with its total cost standing at Tk 4,268.3 crore.
Then the deadline was fixed for June 2022 but it has not been finished yet. However, it is expected that the much anticipated project would be opened for traffic by June 2023, BRT Managing Director Shafiqul Islam said recently.
Like the Gazipur-Uttara road, the other streets including Mirpur to Matijheel also face the same traffic jam due to the under-construction Metro-Rail project.
Though the project work has progressed much, the city roads along the project are full of traffic congestion.
Commuters urged the concerned authority to complete all the project works as soon as possible to relieve them from the intolerable sufferings of the traffic jam as it consumes their time and energy every day.