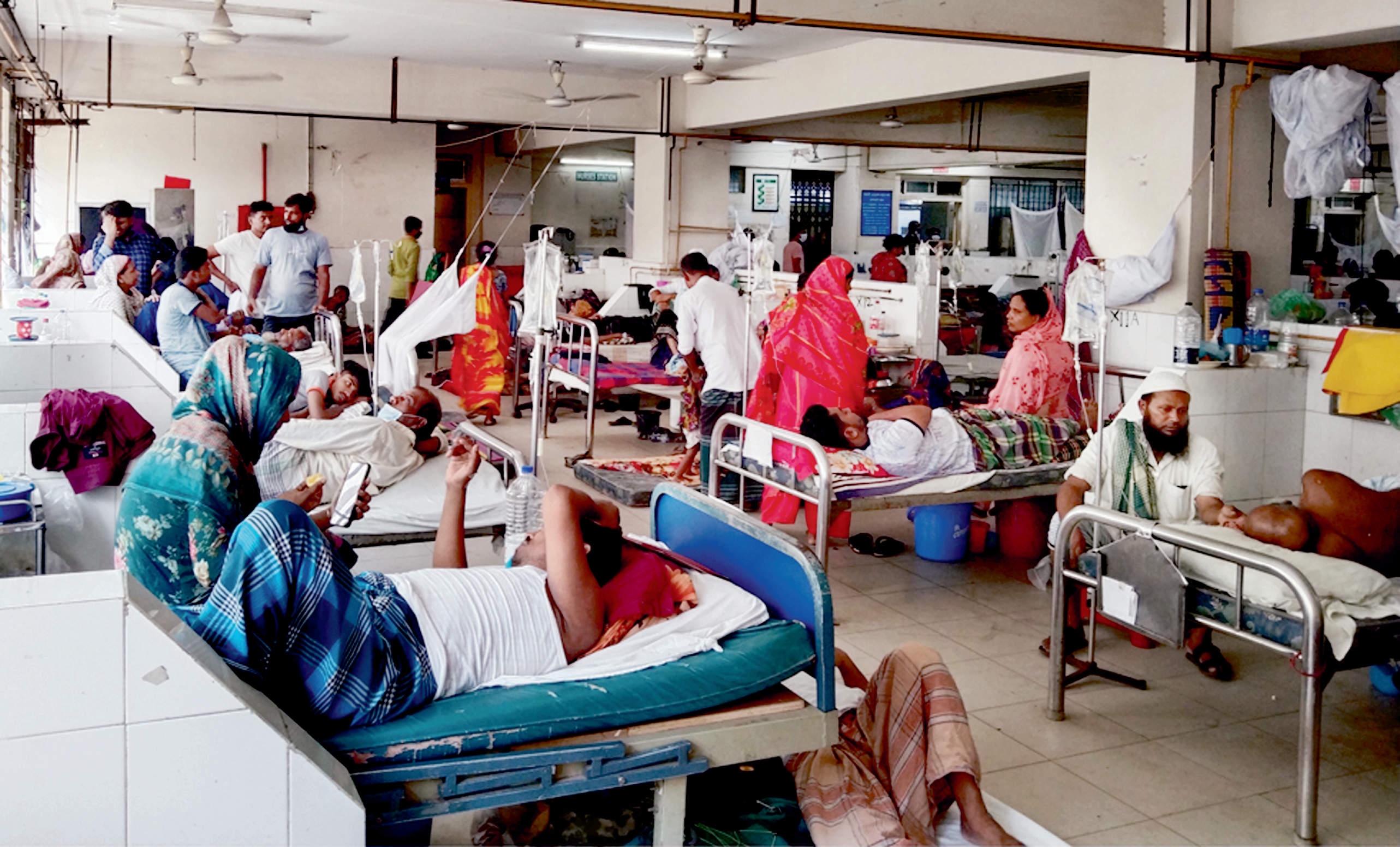 Dengue fever patients lying on the beds of Sir Salimullah Medical College Hospital in the capital on Thursday. NN photo

Reza Mahmud :
Public health experts stressed on combined effortsÂ  for destroying Aedes mosquito breeding hubs as dengue fever has spreading rapidly across the country.
The Directorate General of Health Services (DGHS) data showed that the number of infections are on surge in recent days.
This year's death toll from dengue in the country rose to 63 on Wednesday with two more deaths being reported from Dhaka.Â  On June 21, the DGHS reported the first death of the season from dengue.
The DGHS data showed that another 637 patients were hospitalised for dengue in 24 hours to Thursday morning. Of the new patients, 417 were admitted to different hospitals in Dhaka and 220 outside it, according to the Directorate General of Health Services (DGHS).
This year's death toll from the mosquito-borne disease in Bangladesh rose to 63 on Wednesday with two more deaths reported in Dhaka division.
A total of 2,333 dengue patients, including 1,771 in the capital, are now receiving treatment in the hospitals. The DGHS recorded 19,283 dengue cases and 16,877 recoveries so far across the country.
Last year, 28,429 dengue-infected people were admitted to hospitals, while 105 of them died.
Officials from Dhaka South and North City Corporations have blamed late rain fall due to climate change for the sudden surge of the dengue cases.
They also have given responsibilities of the people's less awareness for Â Â Â  the sharp rise of the dengue infections.
Meanwhile public health experts suggested for combined efforts for destroying Aedese mosquito breeding hubs to curb the viral fever.Â  Â
When contacted, Professor Emeritus Dr. ABM, Abdullah, the private physician of the Prime Minister, told The New Nation on Thursday, "It is not a matter of blame game.
It needs combined efforts to destroy all Aedese breeding hubs so that all the people can get rid of the fever."
He said the people have responsibility to make their surrounding areas free from such stagnant water for the sake of keeping themselves away from the mosquito born disease.
When contacted, Professor Dr. M. Muzaherul Huq, former Advisor of the World Health Organisation (WHO) told The New Nation, "Awareness of the people and the actions of the Municipal health authorities can minimize the suffering and casualties. But the measures have to be taken in time mainly in the rainy seasons."
"Most of the canals are filled with waste with stagnant water which becomes breeding hubs of mosquitoes. These need to be cleaned and excavated regularly. There should be running water in the canals and drains," he said.
He said that the health authorities particularly the Municipal authority to be made responsible and accountable for dengue and it's consequences.
When contacted, Brigadier General Md. Zobaidur Rahman, Chief Health Officer, DNCC told The New Nation, "The late and intermittent rain is behind the breeding of Aedese mosquito breeding which is responsible for current surge of the dengue fever."
He also urged the people to keep inside of their houses free from stagnant clean water.
Â When contacted, Dr Fazle Shamsul Kabir, Chief Health Officer (additional charge) of DSCC told The New Nation, "The DSCC is close to curb the dengue infections in its jurisdictions with the honest and utmost efforts."
He said that there was only 10 to 12 pc of total infections in the DSCC areas.