Affri Selina going to UK for own movieâs screening 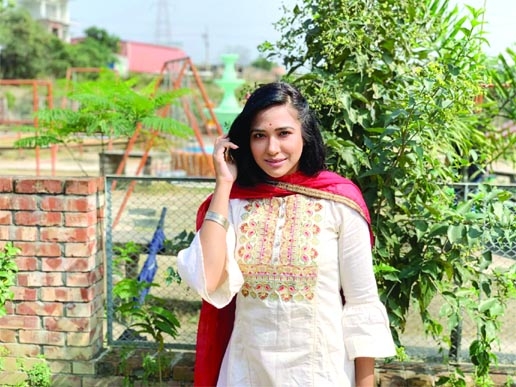 Sheikh Arif Bulbon :
Talented actress of present
generation, Affri Selina starrer and Minhaj Kibria directed movie of English and Bengali languages titled 'Before I Die' was released in last Eid-ul-Azha at Genesis Cinema Hall in London, UK. Coming December, this movie will be screen in some states of the UK. To attend screening of her movie, Affri Selina is going to UK next month. The actress confirmed the news yesterday. While talking in this regard, Affri Selina told this correspondent, âThough my acted movie 'Before I Die' did not release in Bangladesh but I hope coming January or February it will be released in our country. In fact, I yet not watch my acted this movie on the big screen. I am expected to watch this movie in theatre halls in the UK along with others. When the movie first released in the UK in Eid-ul-Azha, I got huge response from there. I believe when the movie will be released in Bangladesh, I will surely get same response from the audience. Basically, 'Before I Die' is an exceptional movie as I believe.â
Meanwhile, last Eid on Channel i, Affri Selina starrer and Rasel Ahmed directed a movie titled 'Istition' was also released. Story of this movie was based on Masum Reza written a story.
Affri Selina informed that now she is busy with acting in television dramas and serials. Now she is engaged with some ongoing drama serials. These are: Sagor Jahan directed 'Online Offline,' Noim Imtiaz Neyamulâs 'Sokhi Sob Kore Rob,' and Mahmud Hasan Ranaâs 'Jhorer Pakhi.' Therefore, she has been attached with Nazmul Huda Emonâs new serial titled 'Cool Age' where she is playing the role of Tonni. Basically story of this serial is based on stories of ups and downs of eight college friends in their lives, said the actress.Â