Apurba, Mamo to pair up again after three years 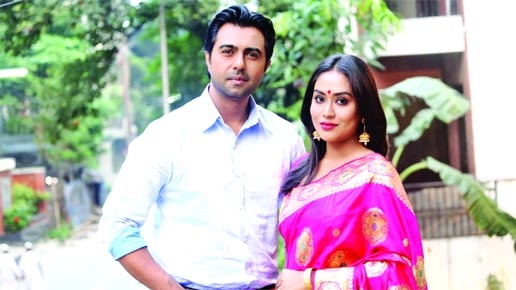 Entertainment Report :
Popular actor of the small screen Ziaul Faruq Apurba and actress Zakia Bari Mamo recently paired up again for a single episode drama after a break of three years. Before that, as a pair, they worked together in several numbers of dramas.
After a long time break, they worked as a pair again in the romantic drama titled 'Phul Fotanor Din,' directed by S R Majumder. The shooting of the drama took place in Apanghor, a shooting house in the capitalâs Uttara area. Shooting of the drama was wrapped up recently.
While talking about acting in this drama, actor Apurba said, âNow there is a trend of acting in pairs in single episode dramas in the country and the viewers really like this kind of dramas as well. I enjoy working with Mamo. As a co-artiste, she is a good actress.â
Mamo shared her feelings by this way while talking about acting in the drama, âI really feel comfortable to work with Apurba. I have liked story of the drama and my character.âÂ Â Â Â Â Â  Â
Mamo also said that Apurba and she will act together in another single episode drama titled 'Apon Je Jon' on November 11.
This drama will be directed by Shahjahan Sourav, the actress added.