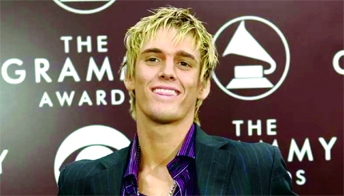 AFP, Los Angeles :
Aaron Carter, the American singer who soared to fame at the turn of the millennium with his hit album Aaron's Party (Come Get It), died Saturday, TMZ said. He was 34 years old.
The entertainment outlet reported that the brother of Backstreet Boy Nick Carter was found dead in his tub at his residence in Lancaster, California.
A police spokesperson told AFP that officers responded to Carterâs home at 10:58am and found a deceased body, but were not yet able to publicly identify the person. Carterâs manager did not immediately respond to an AFP query.
The artist born December 7, 1987 in Tampa, Florida began performing at age seven, releasing his debut album at age nine in 1997. His sophomore effort Aaron's Party (Come Get It) sold three million copies stateside, propelling him to teen heartthrob status.
He became a regular on preteen Nickelodeon and Disney shows, including an appearance on the popular 'Lizzie McGuire.'