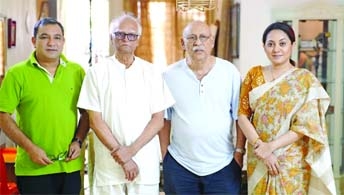 Entertainment Report :
Ekushey Padak and National Film Award winner noted actor, playwright and director Abul Hayat has made a new drama after a long time break. Title
of the drama is: 'Esho Shyamol Sundor.' Noted actor Khairul Alam Sabuj, Tauquir Ahmed and Tareen Jahan acted in
pivotal roles in the drama.
While talking about making the drama, Abul Hayat said, âOn the way of life journey, human beings face many incidents in which they sometimes do not express their anger or not. When we donât express this thing a mental stress starts to prevail in our minds during that time. In this drama, Tareen acted in that role where she faced three incidents in her life. Sometimes, it seems all these incidents are closely related with others. From that pain, she decides not to render song in her life and even she doesnât give any opportunity to someone to render song. In her this kind of mental situation, people start to think Tareen has become a mad. But at last, she returns to normal life by rendering song. After many years, Tauquir Ahmed acted in this drama. Khairul Alam Sabuj, Tareen and Tauquir - alls portrayed their characters properly and overall they made the drama a good project at the end. This drama will go on air soon on Channel i.â
While talking about acting in the drama veteran actor Khairul Alam Sabuj shared his feelings by this way, âI have liked story, direction and everybodyâs acting in the drama. Overall, it has become a nice drama.â
Tauquir Ahmed shared his feelings by this way, âAfter many days, I acted in this drama. I was delighted to take part in the shooting of the drama. It is a soft and cool tempered and organised drama. I hope who will watch the drama they will surely enjoy it.â
Tareen Jahan said, âAfter a long time, I worked under Hayat Uncleâs direction. While working under his direction and his written drama I always feel a challenge because his written story, script and dialogues are top class. Overall, there must have message in his written dramas. I can give an example of his written a drama titled 'Moddhyanno Bhoj Ki Hobe.' Viewers are still showing their interest watching this drama. And for this drama, I still get response from the viewers. This new dramaâs story revolves with psychological matter of a mother. As uncle himself is an actor, so while acting I can learn many things from him. He always catches up the line-up to the actors during acting. I really enjoyed lot acting with Tauquir Bhai after a long time.âÂ Â