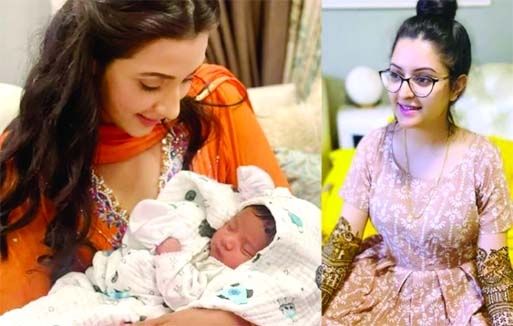 Entertainment Report :
Dhallywoodâs popular actress and former Lux superstar, Bidya Sinha Saha Mim wrote on her verified Facebook page that she will take legal action against those who are trying to put her down after Pori Moni tagged her in a cryptic status on Thursday.
A few days ago, Dhallywoodâs another popular actress, Pori Moni publicly expressed her distaste when her husband Sariful Razz held the hand of co-star Bidya Sinha Mim at a promotional event for their movie titled 'Damal,' directed by Raihan Rafi.
Pori Moni shocked the entire Bangladeshi virtual space on Thursday by publicly tagging Raihan Rafi and Mim in what can only be described as a rage-fuelled status from her personal Facebook profile.
In the viral status, she accused Raihan Rafi of doing brokerage, aside from cinema.
Pori Moni also wrote that Mim âshouldâve been satisfiedâ with her own husband.
She also tagged Razz and said âyou shouldnât have let it go this far.â
Although the anger of the actress at her colleague Mim has been known for some time, it is still unclear about Raihan Rafiâs role in all this.
Earlier, the same afternoon, Pori Moni informed that she caught a cold and cannot talk about the issue at the moment.
Mim also did not want to comment on the matter. Both Sariful Razz and Raihan Rafi could not be reached on their phone on the same afternoon. However, a few hours late, Mim took to her verified Facebook fan page and shared her stance on the matter. She wrote: âI have been flooded with selfless love after the skyrocketing success of the movies 'Poran' and 'Damal.' I am overwhelmed with the response. I can say that I am having the best time of my life and career. Just at this time, some people are trying to stop me by spreading rumours and negativity about me.â
Emphasising her family values and upbringing, she wrote, âI have never allowed anything to be associated with my professional life that could question my journey. I know what my family upbringing and values are, what kind of family atmosphere I grew up in, what my surroundings are like -- now I donât know the language of replying to those people who are saying baseless things about me, without any evidence.â
Mim also wrote that she will take legal action against those who are trying to put her down. She wrote: âHowever, if things go out of hand, I will definitely take action against them according to the prevailing laws of the country. I also want to say to my well-wishers and loved ones that donât get confused by any kind of fabricated false words.â