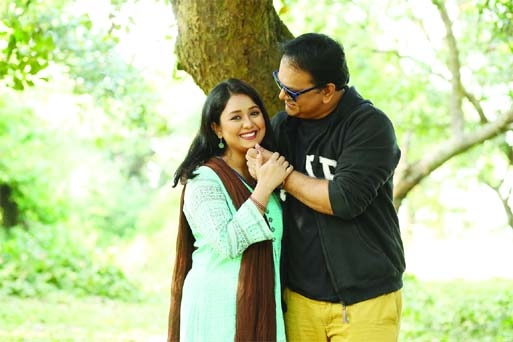 Sheikh Arif Bulbon :
Popular actor, playwright, film and drama director, Mir Sabbir and celebrated actress, Farhana Mili worked together after a break of one year. To air in a private TV channel, they worked together for a seven-episode serial titled 'Bapka Beta.â Anup Bala wrote story of the
serial, while S I Sohel gave direction
of it. Shooting of the serial took place
at Pubail in Gazipur.
While talking about acting in the serial, actor Mir Sabbir said, âS I Sohel was hailed from Barguna. For this reason, more affection works to him from me. For the first time, I acted under his direction. He has intention to do his level best effort to make the work successful. In this serial, I acted with Farhana Mili after one year. I enjoyed a lot working with her. I hope viewers will enjoy the serial.â
Actress Farhana Mili shared her feelings by this way to talk about acting in the serial, âIt was my first work under this directorâs direction. Story of the serial is nice. Besides Mir Sabbir, my other co-actors of this serial like Shelly Apa, Rumi Bhai, Sharna Lata - everybody acted really in their characters. After airing the serial, viewers will enjoy it as I believe.â
Meanwhile, Mir Sabbir informed that he has submitted his first directed government granted movie 'Raat Jaga Phool' to compete for getting the National Film Award. Many persons hope that this movie could get awards in different categories specially story of the movie, cinematography, outstanding acting of Mir Sabbir, and overall playback songs of the movie. When the movie got released audience showed their keen interest to watch it in theatres.
It is noted that 'Raat Jaga Phool' was Mir Sabbir directed his debut movie.
On the other hand, 'Monpura' was Farhana Mili acted her debut movie. It was also Mili acted only movie which was directed by Gias Uddin Selim. This cinema remains a milestone to Mili's acting career. Mili played outstandingly well in role of Pori in 'Monpura.'Â