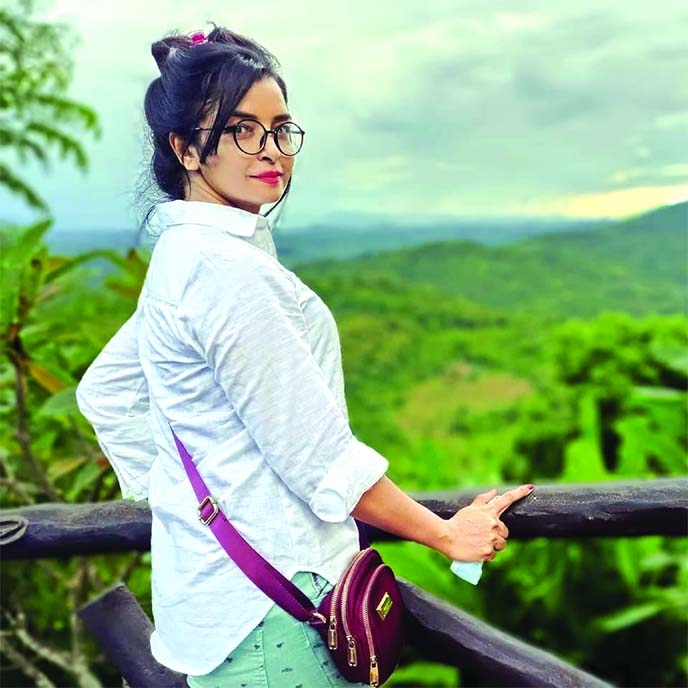 Sheikh Arif Bulbon :
âBasically I like to work either in web film or cinema as I believe I am an actress. As an actress, it is the main thing to act by own way to portray my character properly if there is
a good story and character. I donât know how much I took place in the minds of the
viewers as an actress. But
I am trying to give my level best effort in my works to
present my characters properly. In my eyes, I see the dream to be a good actress at all. This effort will continue forever,â said popular actress of the small screen and OTT of present time, Elina Shammi yesterday while talking about working in web films and cinemas at a time.
According to the actress, she has been engaged with four movies now. These are: Mushfiqur Rahman Gulzarâs 'Tungiparar Dussahoshi Khoka,' Bondhon Biswasâs 'Chhayabrikkho,' Apurba Ranaâs 'Jolrong' and Tanvir Hasanâs 'Moddhyobitto.'
Shammi informed that right now she is busy with shooting of movie 'Moddhyobitto.' Among rest three movies, she has already completed dubbing of two movies, while rest oneâs dubbing yet not finished.
Elina Shammi said that on November 19, her acted a web film titled 'Muntashir' will be released on Apps. Iffat Jahan Momo has made this web film where Elina Shammi played the role of Afrin. Shammi is very much optimistic about her character in this web film.
Meanwhile, Elina Shammi is also acting in two drama serials now. These are 'Jhorer Pakhi' on RTV and 'Octopus' on ATN Bangla. The actress said that she is playing significant roles in these two serials.
It is noted that as an anchor, Elina Shammi first won the hearts of many viewers. She lastly got huge appreciation for acting in Iftekhar Shuvo directed movie 'Mukhosh.' Basically she came into limelight last year for acting in Raihan Rafi directed 'Janowar' and Anonno Mamun directed movie 'Kosai.'Â