Maha getting huge response in beginning of airing new serial 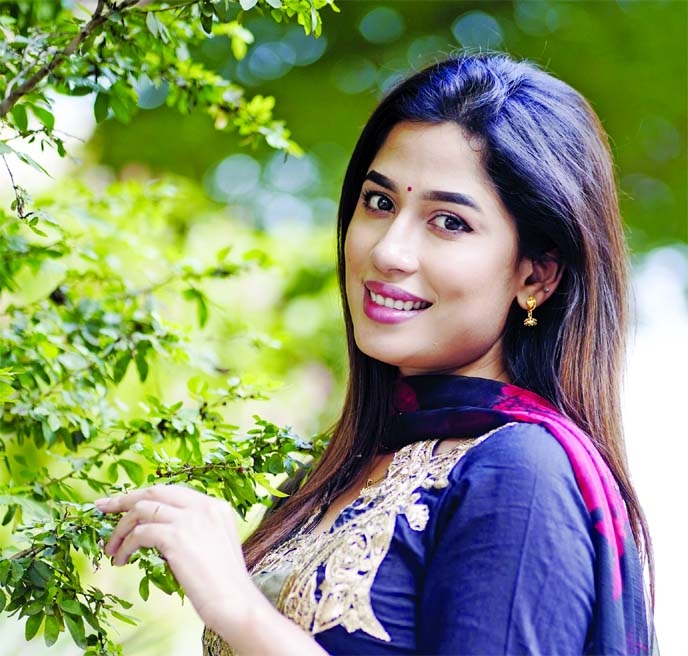 Sheikh Arif Bulbon :
Last week talented director Tuhin Hossain directorial and Golam Rabbani written story based new serial titled 'Chirokumar Chiku Sangha' started to air on NTV. Promising actress Nayma Alam Maha is acting in the central character in this serial. Viewers' choice popular actor of the small screen, Shoraf Ahmed Jibon is acting opposite Maha in the serial. After airing, various clippings of the serial are being aired on NTVâs Facebook page. Of those, Maha and
Shoraf Ahmed Jibon starrer some clippings are available
on the NTVâs Facebook page. Maha is getting huge
response from the viewers after airing those clippings.
In fact, withing very short days, Maha has established her position in the field of acting in small screen. Now she can adjust herself in any character. According to the actress, she came into acting to love acting. She wants to establish herself as a good actress now. Day by day, she gave huge efforts to come into this position. As a result, she is getting opportunity regularly to act in reputed directorsâ works now. As a part of its continuation, Maha is now acting in Tuhin Hossain's this serial on NTV.
Basically, Maha has come into discussion to act in Tuhin Hossain directed ongoing drama serial 'Chirokumar Chiku Sangha.' Her working range has been increased after acting in this serial. Maha said, âChirokumar Chiku Sangha' is my acted new serial. Story of this serial is contemporary. It is basically a comedy story based serial. Therefore, Tuhin Bhai is a talented director. Under his direction, I enjoyed a lot working with his unit in this serial. My co-actor Shoraf Ahmed Jibon also co-operated me a lot during shooting. Overall, I am very much satisfied working in the serial. After airing the serial, I am getting huge response from
the viewers. In fact, it is truly said that this time
I am getting the opportunity to work in good story based works under noted and talented directorsâ direction. With self-interest, I have intention to improve my acting skill. To reach into a good position, I am ready to give my level best effort. I want to establish myself as a good actress now. I want everybodyâs cooperation.â Â
Maha informed that few days ago, she returned from Thailand after taking part in the shooting of 52-episode serial titled 'Emon Jodi Hoto.' Abu Hayat Mahmud and Saidur Rahman Russell jointly gave direction of the serial. Therefore, Maha is regularly acting in Nima Rahmanâs ongoing mega serial 'Gulshan Avenue Season-2,â Sagor Jahanâs serial 'Online Offline,' and Kaiser Ahmedâs ongoing serial 'Bokulpur Season-2.' Meanwhile, Maha starrer
and Salauddin Lavlu directed new serial titled
'Shonda Panda' is waiting to air now, said the actress.Â Â