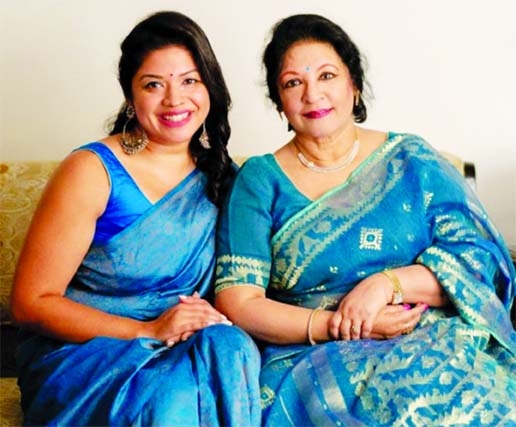 Entertainment Desk :
Talented Bangladeshi singer and songwriter Armeen Musa and her mother and noted Nazrul exponent Dr Nashid Kamal have been nominated for the 65th Annual Grammy Awards in the
category of Best Global Music Album
on Wednesday.
The mother-daughter duoâs song titled 'Jaago Piya,' which was featured on the Berklee Indian Ensembleâs debut album 'Shuruaat,' enabled them as the first Bangladeshis to be nominated for the worldâs most famous musical awards.
Armeen Musa confirmed the news yesterday. She said that she is overwhelmed by this achievement. âStill in disbelief,â she said although the official website of Grammy also confirmed the nomination on Wednesday.
The first in a series of original compositions from the Berklee Indian Ensemble, 'Jaago Piya' was originally written and voiced by Armeen Musa, while Dr Nashid Kamal penned the Bengali version of the lyrics.
Legendary Asian musicians including Ustaad Zakir Hussain, Shankar Mahadevan and Shreya Ghoshal, to name a few, are also featured on the Berklee Indian Ensembleâs (BIE) debut album 'Shuruaat', alongside Armeen Musa. One of the most popular music artists in present Bangladesh and the first-ever Bangladeshi student in the Berklee Indian Ensemble and a Visva-Bharati trainee in Indian Classical music, Armeen Musa garnered critical acclaim for songs including 'Bhromor Koiyo Giya,' 'Lona Deyal' and more. She is the founder of the music troupe, 'Ghaashphoring Choir.'
Armeenâs mother and the eldest granddaughter of Bengali folk legend Abbasuddin Ahmed, Dr Nashid Kamal is a highly accomplished artiste in her own right with a career spanning over four decades. She is widely known as one of the most prominent researchers and performers of Nazrul Sangeet and Bengali Folk songs.
Also a classical and semi-classical Bengali music artist Nashid Kamal also performed in many other foreign languages including Urdu, Japanese, Chinese, Rumanian and Turkish. She is also an eminent academic and researcher in demographics and prolific writer.
The category of this yearâs Best Global Music Album features 'Love, Damini' (Burna Boy), 'Queen of Sheb' (AngÃ©lique Kidjo & Ibrahim Maalouf), 'Between Us... (Live)' (Anoushka Shankar, Metropole Orkest & Jules Buckley featuring Manu Delago) and 'Sakura' (Masa Takumi).
The 2023 Grammy Awards ceremony will be held at the Crypto.com Arena in Los Angeles on February 5.
The âBig Threeâ categories - album, record, and song of the year, each feature battles between BeyoncÃ© and Adele, much as they did six years ago. Each of those categories has three additional nominees: Lamar, Lizzo, and Harry Styles.