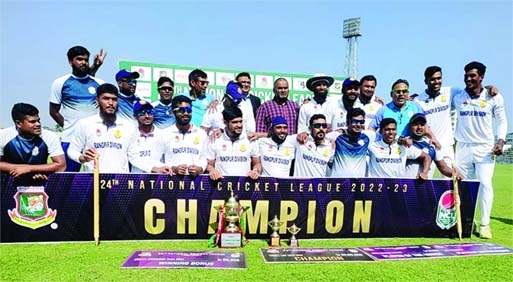 Members of Rangpur Division team, the champions at the National Cricket League pose for a photo session with the championship trophy at the Shaheed Chandu Stadium in Bogura on Wednesday.

Agency :
Rangpur Division won their second National Cricket League (NCL) title on Wednesday with a five-wicket victory over Sylhet Division at the Shaheed Chandu Stadium in Bogura on the third day of their Tier 1 sixth-round game.
Rangpur managed to cross the line in the first session of Day 3's chase of a paltry 88-run target.
Rangpur openers Myshukur Rahman (1 off 7) and Abdullah Al Mamun (10 for 16) were both dismissed early by Sylhet pacers Ebadot Hossain and Rejaur Rahman Raja of Sylhet.
With no scoreboard pressure, Rangpur were never really in trouble as Rishad Hossain's 20 and Mim Mosaddeak's unbeaten 29 saw them cross the line in 23.3 overs in their second innings.
Earlier, inspired by pacer Robiul Hoque's five-wicket haul, Rangpur bundled out Sylhet for 107 in their first innings, clinching the title with a draw.
Rangpur replied with 188 all out despite Sylhet pacers Ebadot and Raja taking nine wickets between them.
Sylhet were bundled out for 168 in their second innings thanks to another concerted bowling effort from Rangpur, setting a low target that the Akbar Ali-led side easily met.