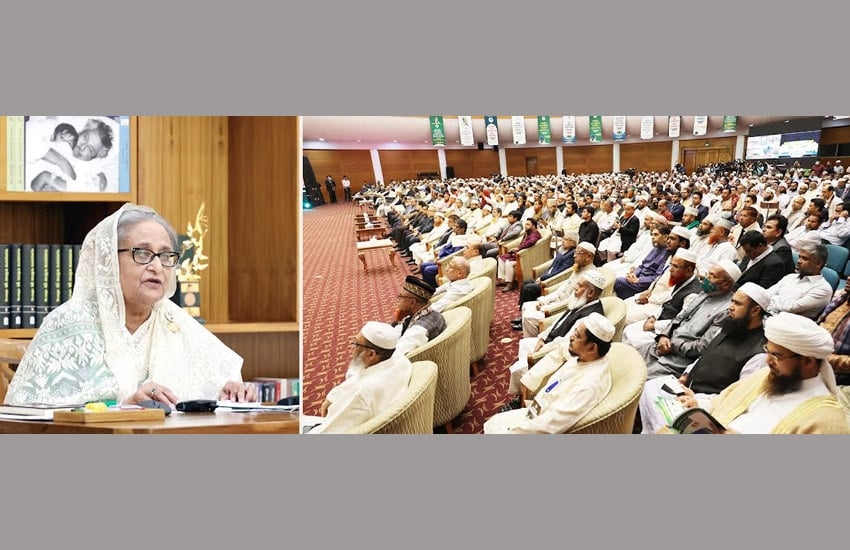 Prime Minister Sheikh Hasina on Thursday urged all to resist the force that misinterprets Islam.

The premier was inaugurating the first-ever national level conference and fair on Hajj and Umrah Management in the capital, through a virtual platform from her official residence Ganabhaban.

The objectives of the event include providing the pilgrims with proper hajj-related information, making them aware about current technology-based hajj management, enabling them directly contact with Hajj agencies and reducing the influence of middlemen and scammers.

The three-day fair remains open to pilgrims from 10am to 8pm every day.

Hasina said Islam is the best religion in the world. But this holy religion faces criticisms due to a few militants.

âWeâve adopted zero tolerance policy towards militancy to uphold the peaceful glory of holy Islam by keeping the country free from militancy,â she said.

Focusing on her governmentâs success to improve hajj management, the PM said she had brought many improvementsÂ  during her first regime from 1996-2001. The hajj management got worse again when Awami League was out of power for eight years after 2001.

âBut now weâve been able to bring world-class improvements in the hajj management since weâve been in power for a long time since 2009 by the grace of Allah,â she said.

She said her government set up a separate hajj office in Jeddah in 2009 and appointed a counselor (hajj) and a consultant general (hajj) there.

âEvery service including visa, passport, housing, medical facilities, travel to Saudi Arabia and return from the hajj were made easier for the hajj pilgrims,â said adding that her government dedicates three airlines including Biman Bangladesh for hajj pilgrims.

The PM said she had taken the measures on her experiences as she found many irregularities in hajj management (for Bangladeshi pilgrims) since she first performed the hajj in 1985 at the invitation of the king of Saudi Arabia.

âI saw such a messy situation with my own eyes. So, when I formed the government, my efforts were there to remove the problems of pilgrims,â she said.

The PM said if any agency cheats or harasses pilgrims, tough administrative measures are being taken against the offender.

âThose who will harass the guests of Allahâs House in the coming days face severe punishment. Itâll have to be remembered,â she said.

In the conference, two seminars will be held on 'Hajj and Umrah Management: Achievements and Actions needed' and 'e-Hajj Management and Route to Mecca Initiatives.'

Different Hajj agencies, financial organisations and the relevant authorities have installed some 150 stalls and pavilions in the three-day Hajj and Umrah Fair.

Bangladesh is the 4th largest pilgrim-sending country in the world.

In 2022, the Holy Hajj was held with one million pilgrims from all over the world. Of them, 57,885 pilgrims were from Bangladesh.