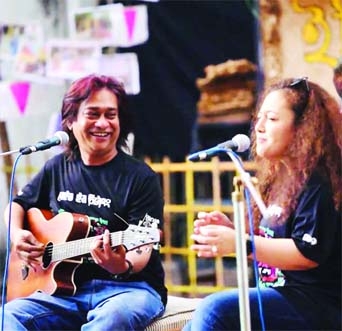 Entertainment Report :
Popular singer and music composer Partha Barua and Close Up 1 famed popular singer Nishita Barua recorded a duet song titled 'Phet Phurudde Tuar Lai' in dialect of Chattogram. The music-lovers are enjoying the song.
The duet song is a soundtrack of the upcoming movie titled 'Made in Chittagong,' which was directed by Imrul Rafat.
The movie will be released today (November 18) in Chattogramâs Sugondha cinema hall but the duet track, however, has already been released on YouTube.
Basically Amanullah Gayen wrote lyrics and also composed the song in 1978. People from Chattogram were already familiar with the song but since the release of Partha Barua and Nishitaâs duet track, it has created great interest among the audience throughout the country.
While talking about the duet song, singer Nishita Barua said, âInitially, there was no plan to use this duet track in the movie 'Made in Chittagong' but Partha Dada decided to use it for the movie. There are many similar songs in the regional dialect of Chattagram, which will create attention from the people if they were re-recorded and released.â