Australia cruise to six-wicket win over England in first ODI 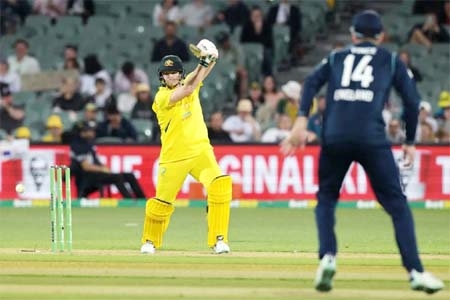 Steven Smith of Australia drives off the back foot against England during their first One Day International cricket match at the Adelaide Oval in Australia on Thursday.

AFP, Adelaide :
A superb Dawid Malan century was in vain as Australia cruised to a six-wicket win over England in their first One Day International (ODI) at the Adelaide Oval in Australia on Thursday.
Malan hit a stylish 134 as England made 287-9, but it never looked enough on a flat batting track that offered nothing for the bowlers.
Australia were largely untroubled as they reached the target with 3.1 overs remaining.
The Australian openers had made light work of the England attack and were in control from the outset as both David Warner and Travis Head launched an all-out assault.
They brought up the century partnership in just 88 balls, with only Olly Stone able to contain the two left-handers.
Neither looked in any danger until Head pulled a short ball from Chris Jordan straight to Phil Salt at deep square leg to fall for 69.
Warner appeared headed for his first century in almost three years until, on 86, he pulled David Willey in the air and was well caught by Sam Billings at deep backward square.
But Smith, who finished not out 80, was untroubled as he guided Australia home despite losing Marnus Labuschagne for four and Alex Carey for 21 along the way.
Australian captain Pat Cummins won the toss and chose to bowl, and England were soon in trouble at 20-2 after four overs before Malan strode to the crease.
When he departed, they were 259-8 with the next highest score Jos Buttler's 29.
Malan's 134, his second ODI century after the 125 he scored against the Netherlands in June, came off 128 deliveries, including 12 fours and four sixes.
Cummins, playing his first match as captain following Aaron Finch's retirement, would have been delighted by Australia's start to the innings.
They tied down the English opening pair with some tight line and length bowling, then made a double breakthrough.
Cummins had Phil Salt caught at second slip by Steve Smith on the last ball of the fourth over and two balls later Mitchell Starc bowled the recalled Jason Roy with a beautiful delivery that swung back late.
The Australian captain then put his side on top when James Vince edged to wicketkeeper Alex Carey.
At 31-3 England were struggling but Malan stayed calm, starting slowly and then picking up the pace as the shine went off the ball.