We must not politicize sport, Macron says 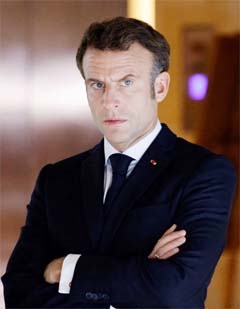 Agency :
French President Emmanuel Macron on Thursday, November 17, waded into the controversy around Qatar's hosting of the 2022 World Cup, insisting sport should not be politicized. "I think we must not politicize sport," said Macron. Les Bleus, the French national team are defending the title they won in Russia in 2018.
The 2022 World Cup, which will kick -off on Sunday, has been dogged by controversy, including over Qatar's alleged human rights abuses, suppression of dissent, mistreatment of foreign workers and persecution of LGBTQ people.
"These questions must be addressed when hosting the event is decided," he told reporters in Bangkok, where he is attending a summit of the Asia-Pacific Economic Cooperation forum.