Fuellkrug strikes on debut as Germany beat Oman before WC 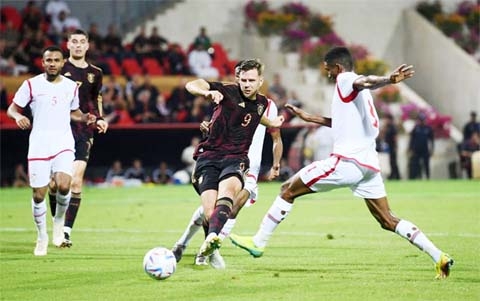 Agency :
Germany striker Niklas Fuellkrug's late goal sealed a 1-0 win over a well-drilled Oman side on Wednesday but Hansi Flick's team were far from convincing in their final warm-up friendly before the Qatar World Cup.
Substitute Fuellkrug, the highest-scoring German player in the Bundesliga this season with 10 goals, swept in his first for the side on his international debut after being fed by midfielder Kai Havertz at the Sultan Qaboos Sports Complex in Muscat.
The 80th-minute goal came as a bitter blow for the spirited hosts, who threatened on the counter at times in the first half and looked set for a famous draw against the 2014 world champions.
Youssoufa Moukoko - who became Germany's youngest debutant since Uwe Seeler in 1954 - nearly marked the occasion with his first goal as the 17-year-old hit the post in the opening half after missing a chance earlier.
Flick will be sweating on the fitness of RB Leipzig defender Lukas Klostermann, who was unable to continue due to injury and left the field after only 34 minutes.
Germany begin their World Cup campaign with a game against Japan on 23 November before a blockbuster clash with 2010 champions Spain four days later. They will wrap up their Group E fixtures against Costa Rica.