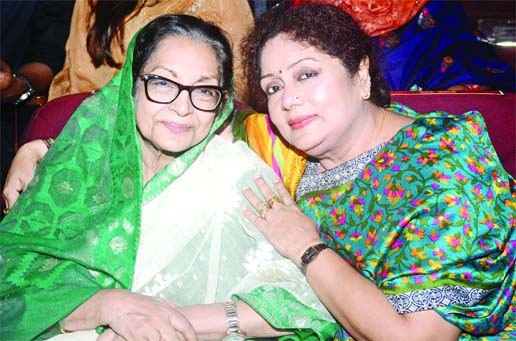 Entertainment Report :
One is veteran actress Dilara Zaman while another one is noted film actress Dilara Yasmin. Dilara Zaman received the Ekushey Padak. She acted mostly in television dramas in her long time acting career. But her acted several numbers of movies also got appreciation from the viewers. She also got the National Film Award. She has already
created hype among the viewers and also received huge loves from them by virtue
of her acting skill.
On the other hand, Dilara Yasmin started her acting career through the silver screen. Later, she won the minds of many viewers by acting in exceptional characters. Now she is still acting a little bit. Few months ago, both Dilara Zaman and Dilara Yasmin were invited in a function. They met there. They took part in discussion for a long time.
Dilara Zaman told this correspondent, âDilara basically acted in movies. She tried to establish herself in the cinema. She is a genuine civilized actress. I have many prayers for her.â
Dilara Yasmin shared her feelings by this way, âIn my life, I met one Dilara Apa for many times. But I never got the opportunity to work with her. I am also fan of her acting. She is not only an outstanding person but also a full-fledged actress. It is no doubt that she is a classic actress. I don't know a person how much becomes 100 per cent perfect at all. She is a complete person as I respect her a lot. I really felt good to see her in that programme. May Allah keeps her well. I pray for her.â
Dilara Yasmin mentioned that she last acted in Z H Mintuâs a movie titled 'Khoma Nei.' Amzad Hossain directed 'Sundori' was Dilara Yasmin starrer her debut movie. Then she acted in movies 'Shesh Uttor,' 'Tin Bahadur,' 'Ekhon e Somoy,' 'Nazma,' 'Somor,' Kalo Golap,' 'Ashoti,' 'Samrat,' 'Awlad,' 'Nadira,' 'Asha Nirasha,' 'Rokter Bondi,' and many more. Theatre play 'Sirajuddaula' was her acted mentionable work on the stage.
Â In television, Dilara Zaman first acted in Khan Zainul written drama titled 'Pinish,' directed by Abdullah Al Mamun, in 1967.Â  'Aguner Poroshmoni,' 'Chandrokotha,' 'Meghla Akash,' 'Chandragrohon,' 'Opekkha,' 'Altabanu' and 'Postmaster 71' are her acted mentionable movies.