After criticism, smooth World Cup seen as crucial to Qatar 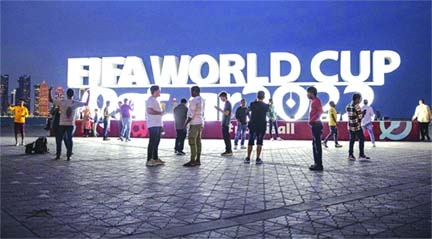 People are pictured in front of a FIFA World Cup Qatar 2022 sign ahead of the World Cup at Doha, Qatar on Thursday.

Agency :
After a bumpy road to the World Cup marked by criticism of its human rights record, Qatar has much riding on the tournament passing off smoothly if it is to be remembered as a success and helps affirm Doha's place on the global stage.
The controversy that has long surrounded the decision to award Qatar the World Cup has built to a crescendo, with unrelenting scrutiny of its treatment of migrant workers and the LGBT+ community prompting the Qatari Emir to accuse detractors of double standards and fabrications.
As Qatar prepares for kick-off on Sunday, the measure of success will be pulling off a tournament enjoyed by fans that concludes without major incident, allowing Doha to switch attention away from the criticism, analysts say.
The stakes are high for a tiny Gulf state with a national population so small - Qataris number around 350,000 - that they could fit into the eight new stadiums built for the occasion.
For Qatar, which has survived as an independent state since 1971 in an often hostile neighbourhood, hosting the World Cup is part of a wider strategy of playing an outsized role in global affairs. A major gas exporter, it hosts U.S. troops, mediates in conflicts, and finances the influential Al Jazeera news network.
"There has been so much negative coverage focusing on labour rights and human rights. The running of the World Cup is the only opportunity that Qatar sees for redemption," said Marc Owen Jones, an associate professor at Hamad Bin Khalifa University.
"The markers of a successful World Cup would be as a nation-branding exercise, to position Qatar as an important sports hub in the Middle East and the wider Arab world," he said.
"In the soft power level, it will demonstrate that Qatar is a global and multilateral player."
The first Middle Eastern country to host the World Cup, Qatar hailed it as a regional milestone when it was awarded the tournament in 2010.
But Qatari officials have appeared increasingly vexed by what they see as unfair criticisms, including boycott calls.
The foreign minister has said people calling for such a move are from a handful of countries - 10 at most - that do not represent the rest of the world which is looking forward to the tournament.
"The reasons given for boycotting the World Cup do not add up. There is a lot of hypocrisy in these attacks, which ignore all that we have achieved," Sheikh Mohammed bin Abdulrahman Al-Thani told French newspaper Le Monde.
A number of teams participating in the tournament are seeking to bring attention to the issues for which Qatar has faced criticism, including LGBT+ rights in the country where homosexuality is illegal.