Vinicius wants to use football for greater good 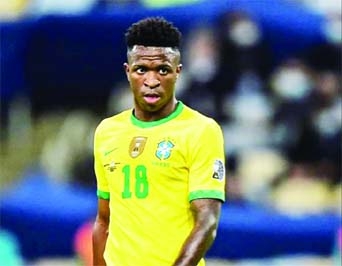 Agency :
Vinicius Jr is the symbol of Brazil outstanding new generation of talent that looks to be peaking at the perfect moment as they arrive in Qatar as favourites to lift a record sixth World Cup.
The 22-year-old scored Real Madrid's winner in the Champions League final against Liverpool and finished eighth in the Ballon D'Or ballot last month, elevating him to world-class level in his fifth season with the Spanish giants.
He said he was eager to ease the pressure on Brazil forward Neymar, 30, who has carried the hopes of a nation almost single-handedly throughout his international career.
"Neymar went through so much as a young player, having to play at such young age and with a lot of pressure. So he is the one that makes sure today that everything is easier for the new generation," Vinicius told Reuters in Turin on Thursday (Nov 17), where Brazil are training before flying to Qatar on Saturday.
"It is a dream because we grew up idolising him. It is very important what he does as a leader. He knows that by helping us, we can help him a lot too, make a great World Cup.
"And that's good for us. It is good for the Brazilian people that want us to win."
Well-spoken and mature for his years, Vinicius welcomes the pressure that comes with the responsibility of being the face of Brazil's new generation.
"I do a lot of listening. I like to learn from the more experienced players like Karim (Benzema) and Neymar," Vinicius said.
"Dealing with pressure was always easy for me, being a star, as you say. I have always been level-headed.