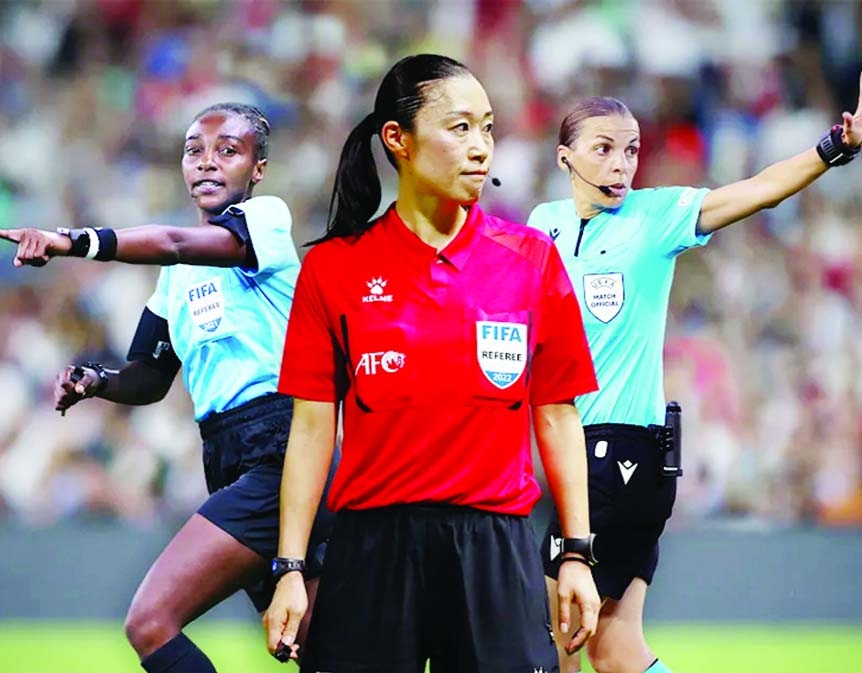 Japanese referee Yoshimi Yamashita knows that being one of three women picked to officiate matches at the World Cup - the first time a woman will be in charge on the game's biggest stage - is not simply about soccer.
Stephanie Frappart of France and Salima Mukansanga of Rwanda must be of the same mind. They are in a pool of 36 referees listed for Qatar - the rest are all men. FIFA has also named three female assistant referees in a pool of 69: Neuza Back of Brazil, Karen Diaz Medina of Mexico and Kathryn Nesbitt of the United States.
Yamashita is aware that her selection put the focus on Japan's low ranking on most measures of equal pay for women, and in global studies of gender equality.
"I would be very happy if women could play an active role in sports in this way, and if sports and especially soccer could lead this," Yamashita said. "In Japan, there is still a long way to go in the world of soccer (regarding participation of women), so it would be great if this could connect to the promotion of female participation in different ways, not only in soccer or in sports."
Men's game
All three have worked men's matches, and their World Cup debut comes in a Middle Eastern country where the role of women is closely prescribed.
Frappart is the best known and has already worked men's games in World Cup qualifying, and the Champions League. She also handled the 2019 Women's World Cup final, and refereed this year's men's French Cup final.
Yamashita has worked games in Japan's men's league, and has also been in charge of the Asian equivalent of the men's Champions League. She was also a referee at last year's Tokyo Olympics.
Earlier this year, Mukansanga became the first woman to referee an Africa Cup of Nations match, leading an all-female officiating team.
"As always, the criteria we have used is 'quality first' and the selected match officials represent the highest level of refereeing worldwide," said FIFA referees committee chairman Pierluigi Collina, who worked the 2002 World Cup final. "In this way, we clearly emphasize that it is quality that counts for us and not gender. I would hope that in the future the selection of elite women's match officials for important men's competitions will be perceived as something normal and no longer as sensational."
Yamashita said the difference in the men's and women's game was, of course, speed. But not simply that some men might run faster.
"It's the speed, but not just the players' speed," she said. "Not the ball speed. It's just the game speed. It means for me I have to make quicker decisions _ more speed."
Then there's the stress, the largest stage, and the attention she is certain to generate at the World Cup.