Who are the favourites to win in Qatar? 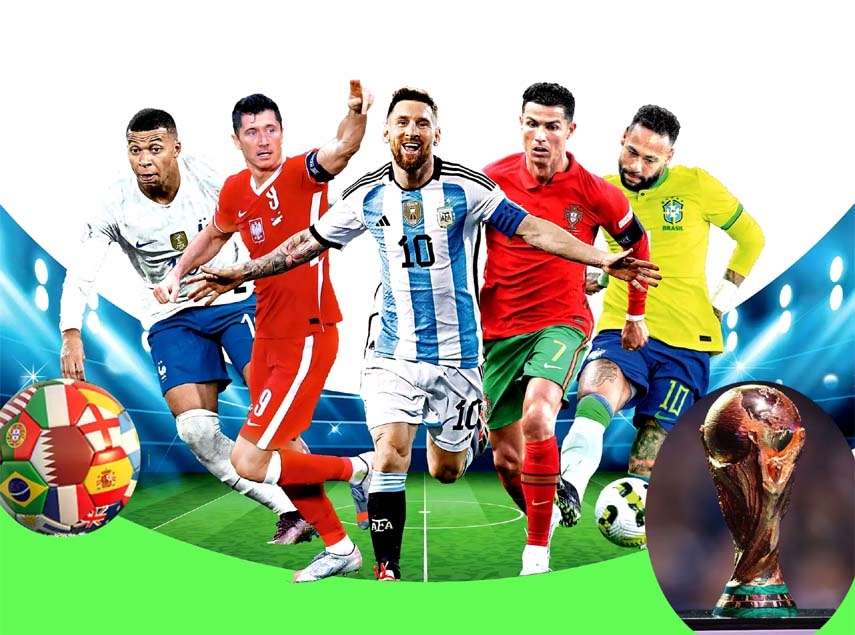 Agency :
The tournament kicks-off today and the likes of Brazil, France, Argentina, Germany, Spain, Nederlands, Portugal, Belgium and England are out to claim the trophy in Qatar.
It's finally here! The 2022 World Cup gets underway this week, kicking off today, when hosts Qatar take on Ecuador.
There is fierce competition for the big prize this time around, with the likes of reigning world champions France heading to the Asian country with the aim of defending their title.
But the presence of Brazil, Argentina and Portugal teams spearheaded by Neymar, Lionel Messi and Cristiano Ronaldo, respectively, will fancy their chances of claiming the crown.
So who exactly are the favourites to go on to win the World Cup in Qatar?Â  Takes a look.
The World Cup 2022 favourites
This year, the outright favourites for global success are Tite's Brazil. The Selecao are trying to win the competition for the sixth time and first in 20 years.
It makes sense for the South American nation to be rated so highly, given they have just one game in the past two years. However, that sole defeat - to eternal rivals Argentina - cost them the 2021 Copa America title, so they will have to be careful not to buckle on the big stage once again if they make it all the way to the final.
The very team that beat Brazil to Copa America glory are the next in line to follow that up with world success.
After all, it will be the final ever World Cup appearance for the likes of Argentina icons Lionel Messi and Angel Di Maria, so the Albiceleste will be fired up to end this era with the crown for the first time since 1986.
France impressed in the qualifying phase by finishing the campaign without a defeat, coming in six points ahead of Ukraine. The title holders boast the likes of Paris Saint-Germain sensation Kylian Mbappe, Ballon d'Or winner Karim Benzema and Real Madrid's rising star Aurelien Tchouameni in their squad.
Didier Deschamps' team had a disappointing Euro 2020 campaign last year and will be out to set the record straight by going all the way and retaining their title as world champions and are set to hold on to it.
They made it all the way to the semi-finals at the 2018 World Cup and the final of Euro 2020, so could this be the year England go all the way to win it in Qatar?
Southgate's team made it through qualifying without losing a single game, but the Three Lions have not been in great form since then. They were horrendous in the UEFA Nations League this year, having failed to win any of their six matches against Italy, Hungary and Germany.
But the 1966 tournament winners have a strong squad to work with and the fans are feeling confident once again.
Spain have gone through a bit of a revolution over the last few years in the wake of their disappointing World Cup 2018 finish. They did well at Euro 2020, making it to the last four before losing to eventual winners Italy. They will be eager to show they have progressed to become one of the world's best teams with success this year.
The outsiders
After crashing out at the group stage in 2018 and then in the first knockout game at Euro 2020, Germany have not had a great deal of luck in recent tournaments. They have hardly been impressive this year, either, having finished third in their Nations League group. Nevertheless, they are available to win this tournament.
Netherlands have managed to shake off their disappointing Euro 2020 display with some positive results over the last year. With Louis van Gaal at the helm and the likes of Virgil van Dijk, Frenkie de Jong and Memphis Depay in the squad, they could spring a surprise and are available to win the trophy for the first time.
Cristiano Ronaldo and his Portugal team are out to show that they can never be written off in what could be the last chance for their golden generation to establish themselves as the best team in the nation's history and could be backed as dark horses.
Then there is Roberto Martinez's Belgium, guided by the quality of Kevin De Bruyne, Romelu Lukaku, Thibaut Courtois and Youri Tielemans,can be backed while a Christian Eriksen-led Denmark are available.