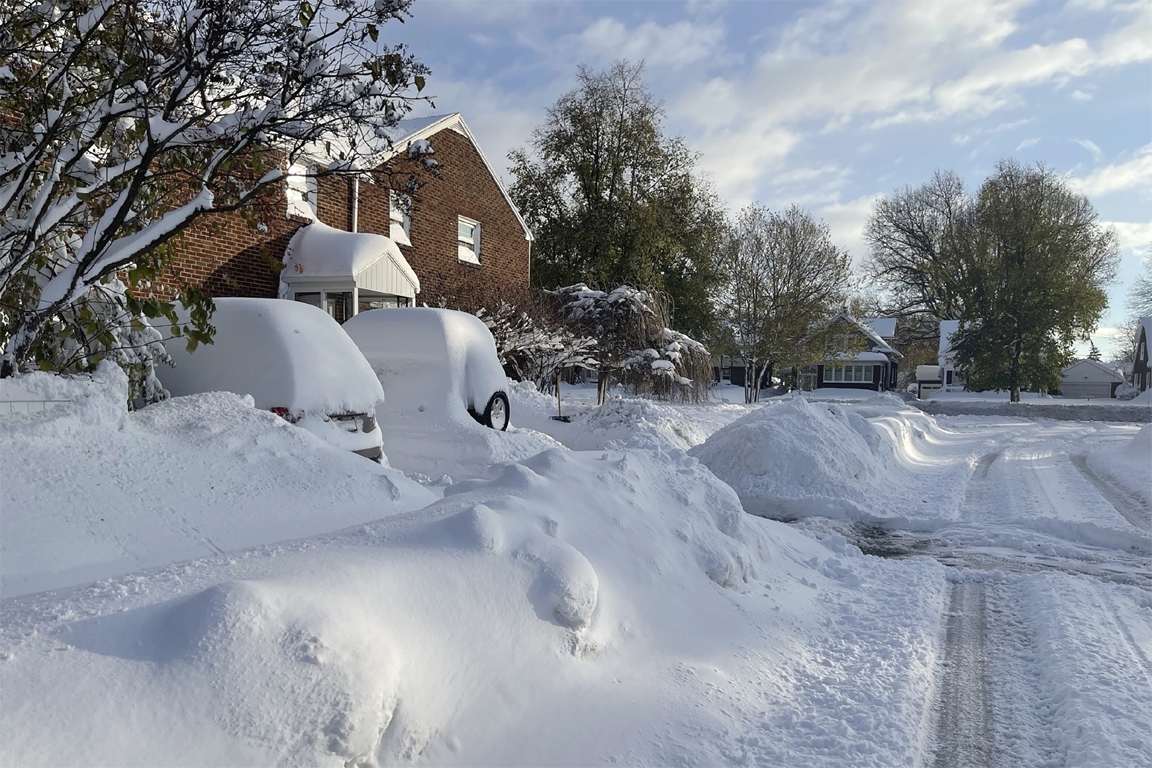 Snow covers the ground in Buffalo, N.Y. on Saturday, Nov. 19, 2022. Residents of northern New York state are digging out from a dangerous lake-effect snowstorm that had dropped nearly 6 feet of snow in some areas and caused three deaths.

Piles of snow, in some places taller than most people, buried parts of western and northern New York as a lake-effect storm pounded areas east of Lake Erie and Lake Ontario for a third straight day Saturday, with possibly even more to come.

Snowfall totals as high as 77 inches (196 centimeters) were reported in the Buffalo suburb of Orchard Park, home to the NFLâs Buffalo Bills. Partway across the state, the town of Natural Bridge, near the Fort Drum Army base, reported just under 6 feet (1.8 meters).

The snowfall in some spots ranked among the highest ever recorded in the area, rivaling the eye-popping amounts that fell during similar storms in 2014 and 1945.

The snowfall totals, which began accumulating Thursday night in some spots, âwould be on the order of historic not only for any time of year but for any part of the country,â said National Weather Service meteorologist Frank Pereira, at NWS headquarters in College Park, Maryland.

The lake-effect storm, caused by cold air picking up moisture from warmer lakes, created narrow bands of windblown snow that dumped feet of snow in some communities, while leaving towns a short drive away relatively unscathed.

It wreaked havoc on some roadways, as trucks that took to smaller backroads to avoid a closure on parts of an interstate in the area ended up in mass gridlock that Erie County Executive Mark Poloncarz described on social media as âtractor-trailer demo derby day."

It also wreaked havoc on the wedding plans of Robert Junge and Maria Szeglowski, who had picked this day for their nuptials after getting engaged exactly a year ago.

Their reception venue canceled, rescheduling for next week. The musician they hired for their church ceremony also couldnât make it, along with more than half of their expected 180 guests.

But they were determined, using one of two limos they rented to get the bride to the church, while Junge drove himself.

âNothing was going to stop me from marrying her, no matter what," Junge, 35, of North Tonawanda, New York, told The Associated Press.

On the bright side, he said, the snow is âgoing to make for some beautiful pictures."

The snowfall forced the National Football League to move Sundayâs game between the Bills and Cleveland Browns to Detroit.

Partial sunshine and a break from the snow came in some of the hardest-hit areas south of Buffalo's center Saturday as the snow bands shifted north.

Forecasters predicted several inches more could fall Saturday night into Sunday, although Pereira said different areas in the region were likely to be hit rather than totals increasing too much in the areas where the heaviest snows had already fallen.

Gov. Kathy Hochul deployed about 70 members of the National Guard to help with snow removal in some of the hardest-hit areas.

Poloncarz tweeted that two people in the Buffalo area died âassociated with cardiac events related to exertion during shoveling/snow blowing.â

The lake-effect has also dumped up to 2 feet (0.6 meters) of snow in some communities in Michigan south of Lake Superior and east of Lake Michigan.

A snowplow driver in the town of Hamlet, Indiana, was killed Friday when his plow slid off the pavement and rolled over, according to the Starke County Sheriffâs Department. Hamlet is about 30 miles (48 kilometers) from Lake Michigan.

Buffalo has experience with dramatic lake-effect snowstorms, few worse than the one that struck in November 2014. That epic storm dumped 7 feet (2 meters) of snow on some communities over three days, collapsing roofs and trapping drivers in more than 100 vehicles on a lakeside stretch of the New York State Thruway.