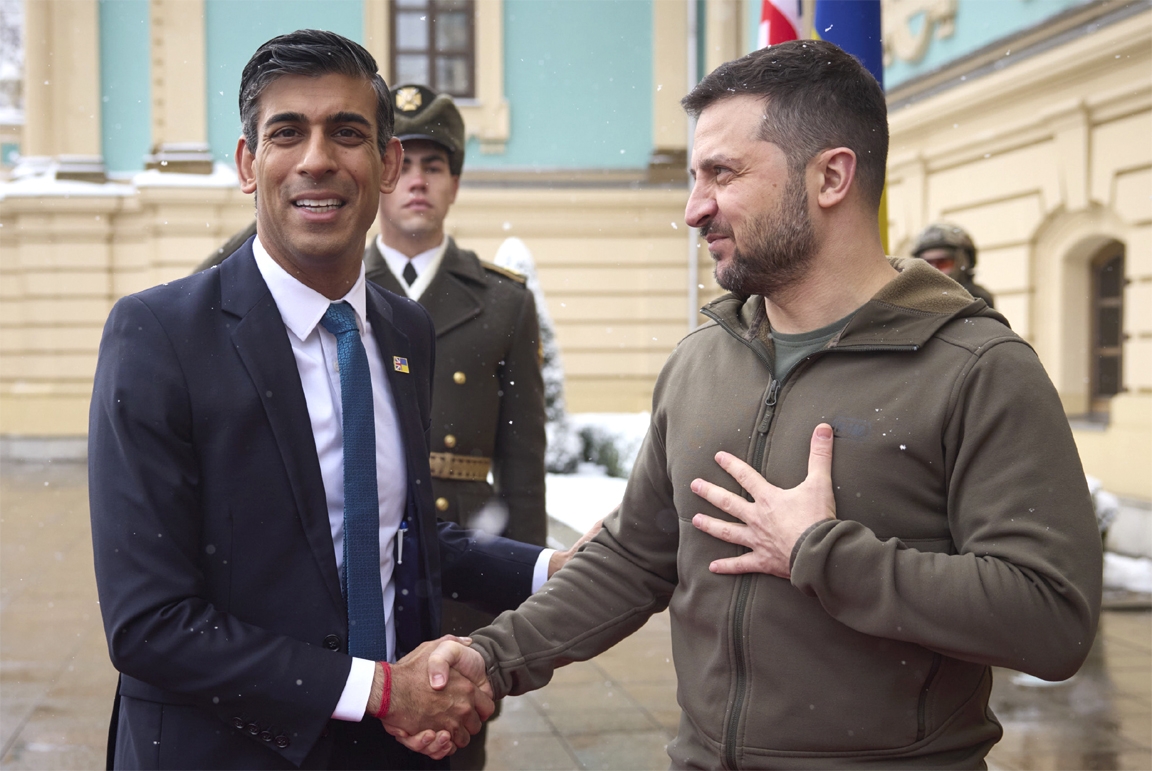 The air-defense package, which Britain valued at 50 million pounds ($60 million), comes as Russia has been pounding Ukraine's power grid and other key infrastructure from the air, causing widespread blackouts for millions of Ukrainians amid frigid weather.

The package includes radar and other technology to counter the Iran-supplied exploding drones that Russia has used against Ukrainian targets. It comes on top of a delivery of more than 1,000 anti-air missiles that Britain announced earlier this month.

The U.K. has been one of the staunchest Western backers of Ukraineâs resistance to Russiaâs invasion. Speaking alongside Zelenskyy, Sunak noted that the U.K. has given 2.3 billion pounds ($2.7 billion) in military aid and pledged: âWe will do the same again next year.â

âYour homes, your hospitals, your power stations are being destroyed," Sunak said in announcing the new air-defense package. âYou and your people are paying a heavy price in blood.â

Speaking through a translator, Zelenskyy said Russian strikes have damaged around half of Ukraineâs energy infrastructure.

As snowflakes fell, Zelenskyy greeted Sunak at a presidential palace for their talks. He called the two countries âthe strongest of allies.â Walking in the snow, they also inspected captured Russian tanks and other destroyed and rusting military hardware used by the invasion forces that are displayed in a Kyiv square.

âWith friends like you by our side, we are confident in our victory. Both of our nations know what it means to stand up for freedom,â the Ukrainian leader said on Twitter.

Former U.K. Prime Minister Boris Johnson, who stepped down in July, won wide praise in Ukraine for his backing. Sunak is keen to reassure Ukraineâs leaders that there will be no change of stance under his leadership, although when he was U.K. Treasury chief under Johnson he was considered resistant to demands for higher defense spending.

âThe courage of the Ukrainian people is an inspiration to the world,â Sunak said. âIn years to come, we will tell our grandchildren of your story.â

Sunak also laid flowers at a memorial for the war dead, lit a candle at a memorial for victims of a deadly Soviet-era famine in Ukraine in the 1930s, and met first responders at a fire station, his office said.

Sunak's visit came in the wake of a major recent battlefield success for Ukraine: the recapture of the southern city of Kherson.

The restoration of rail connections brought further joy Saturday to Kherson's residents, who excitedly waited for the first train from Kyiv.

âThis is the beginning of a new life,â said 74-year-old Ludmila Olhouskaya, who didnât have anyone to meet off the train but went to the station to show support. âOr rather, the revival of a former one.â

In Kherson, the major southern city that Ukrainian forces recaptured more than a week ago, two Russian missiles struck an oil depot â the first time a depot was hit in the city since the Russians withdrew, according to firefighters at the scene. AP reporters said a huge fire and billowing black smoke.

âThere was a strong explosion,â said Valentyna Svyderska, who lives nearby. âWe were scared, everyone was scared ... Because this is an army that is at war with the civilian population.â

Local authorities were struggling to respond to the blaze, the firefighters said, because Russian forces took the city's fire trucks and ambulances when they retreated.

Russia is pressing an offensive in the eastern Donetsk region, and Ukraine reported heavy fighting around the city of Bakhmut, the town of Avdiivka and the village of Novopavlivka.

Russian forces claimed to have repelled a Ukrainian counteroffensive to take back the settlements of Pershotravneve, Kyslivka and Krokhmalne in Ukraineâs northeastern Kharkiv province.

Ukrainian forces said they killed or wounded scores of Russian soldiers during an attack on the village of Mykhailivka in the southern Kherson region, and the wounded were taken to hospitals in Crimea. The claim could not be independently verified.

Russia kept up its strikes on critical infrastructure, with a rocket attack overnight causing a fire at a key industrial facility in Ukraineâs southern Zaporizhzhia region, according to the region's chief. Some parts of the regional capital of Zaporizhzhia were left without heat.

The head of Ukraineâs biggest private energy firm told the BBC that Ukrainians who can afford it should consider leaving the country to relieve pressure on its war-damaged power system.

âIf they can find an alternative place to stay for another three or four months, it will be very helpful to the system,â said Maxim Timchenko, chief executive of DTEK. âIf you consume less, then hospitals with injured soldiers will have a guaranteed power supply."

In Poland, a funeral was held Saturday for one of the two men who died when a missile landed there this week, according to the state news agency PAP. A military honor guard and Polish and Ukrainian representatives joined the manâs family and members of the community.

NATO member Poland and the head of the military alliance have both said the missile strike in an eastern farming region appeared to be unintentional and was probably launched by air defenses in neighboring Ukraine. Russia had been bombarding Ukraine at the time.

The U.K. Ministry of Defense noted Saturday that Russia conducted its largest ever-debt issuance in a single day, raising $13.6 billion on Wednesday. It said debt issuance is a key mechanism to sustain defense spending.