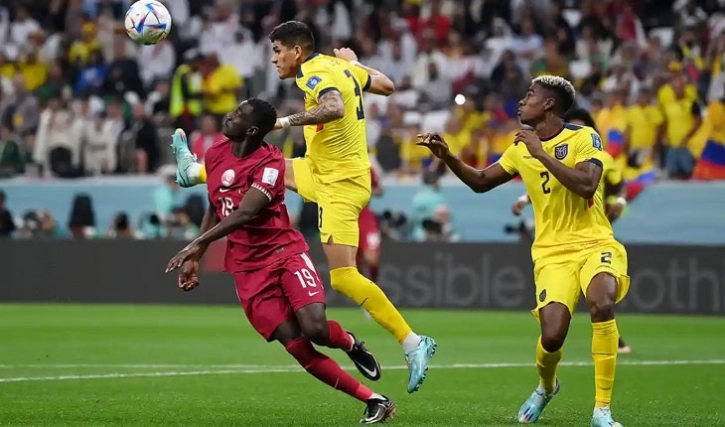 Sports Desk :
Enner Valencia's two goals gave Ecuador a commanding 2-0 win over hosts Qatar in the opening game of the FIFA World Cup at the Al Bayt Stadium in Al Khol. Valencia broke the deadlock in the 16th minute after converting a penalty which he had won. The 33-year-old then made it 2-0 at the half-hour-mark, heading home Angelo Preciado's cross. Valencia, who had a goal disallowed inside the first three minutes, is the oldest player to score a goal in the opening game of a World Cup. Ecuador are at the 44th spot in the FIFA rankings while hosts Qatar are at the 50th spot, report agencies.
In the first half, it was all about the dominance of the South Americans as they completely outplayed Qatar. The first goal was a penalty while the second was a brilliant header.Â  As a result, Qatar became the first World Cup host to lose an opening game.
In addition, Qatar made a disappointing start to their World Cup campaign as the hosts were comfortably beaten 2-0 by Ecuador in the opening match of the tournament.
From the first moments they were second best, and they went into the break two goals down as Enner Valencia netted first from the penalty spot and then with a header to put Ecuador in complete control.
There was to be no miraculous comeback at the Al Bayt Stadium, nor was there any sign of anything resembling one, and Qatar's hopes of making it out of Group A now rely on them getting results against Senegal and the Netherlands. They are the first World Cup hosts to lost their opening game.
Meanwhile, Qatar's debut began in inauspicious fashion, as Ecuador had the ball in their net inside three minutes. Saad Al Sheeb came off his line to claim a free-kick, got nowhere near it and Felix Torres sliced a volley into the six-yard box, where Valencia nodded into the empty net. VAR came to the rescue for the hosts though, finding a very marginal offside to rule it out.
The reprieve did not last long, Sheeb again having a moment to forget as he brought downÂ  Valencia who had gone round him. The Ecuador captain stepped up himself, rolling the penalty into the bottom corner.
His second came 15 minutes later, Ecuador getting the advantage their dominance certainly deserved. Angelo Preciado whipped a brilliant cross into the box and Valencia was there to power a header home for his, and his country's, second.
The break did not bring a marked change in Qatar's fortunes, with Ecuador still carring a real threat after the restart. Romaria Ibarra was played through and cut inside onto his right foot, but saw his curling effort saved.
It was not a second-half full of chances and attacking ambition, Ecuador happy to control the match and seal their seventh consecutive clean sheet, with Qatar lacking in the quality required to give the South American side any sort of problems in the closing stages.
Qatar (5-3-2): Saad Alsheeb; Pedro Miguel, Boualem Khoukhi, Bassam Hisham, Abdelkarim Hassan, Homam Ahmed; Abdulaziz Hatem, Hassan Alhaydos, Karim Boudiaf; Akram Afif, Almoez Ali. Substitutes: Mohammed Waad, Tarek Salman, Ahmed Alaaeldin, Yousof Hassan, Meshaal Barsham, Ali Assaballa, Mohammed Muntari, Musaab Khidir, Ismail Mohamad, Khalid Muneer, Salem Al Hajri, Assim Madibo, Naif Abdulraheem, Jassem Gaber, Mostafa Tarek Meshaal,
Ecuador (4-4-2): Galindez, A Preciado, Torres, Hincapie, Estupinan; Plata, Mendez, Caicedo, Ibarra; Valencia, Estrada. Substitutes: Arboleda, Cifuentes, Pacho, Gruezo, E Preciado, Ramirez, Arreaga, Mena, Sarmiento, Palacios, Franco, Dominguez, Reasco, Porozo, Rodriguez.