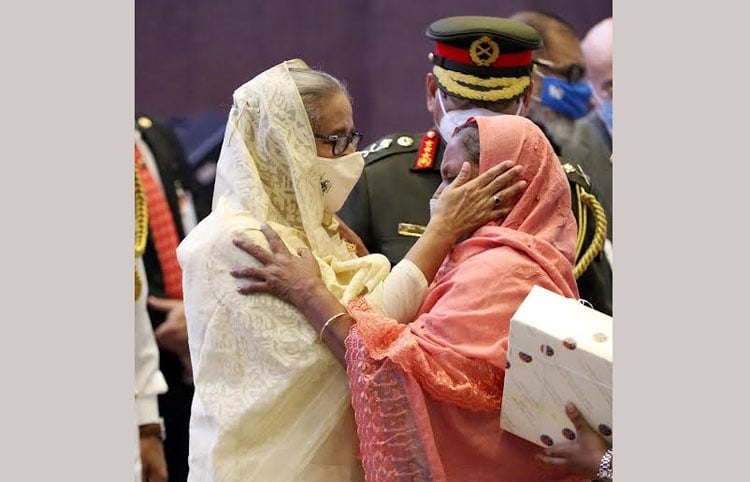 Prime Minister Sheikh Hasina on Monday said that her Awami League partyâs stay in power for three consecutive terms has helped Bangladesh change a lot and develop towards prosperity.

âWe have to advance more as a developing country and become a developed one,â she said.Â  âI have formulated that plan. We have formulated Vision 2041 and Delta Plan 2100 for the future generations.â

The premier was addressing a reception accorded to the gallantry award winning freedom fighters of Bangladesh Armed Forces and their heirs marking the AFD-2022 at Dhaka Cantonment.

She said that as a victorious nation Bangladesh is highly regarded by the world. Bangladeshis now move around the world keeping their heads high.

âWe have achieved that, but we have to advance more in the coming days,â she said.

The PM said that the government is constructing homes for the homeless people offering them opportunities to changing their lives.

âWe are trying tirelessly. Now at least we can say that the people of the world canât neglect Bangladeshis,â she said.

Hasina said that the Awami League as a party and the government never forget the contributions of the freedom fighters.

âAnd that's why we have taken plans to build Bangladesh in the spirit of the Liberation War.â

She said that the country has to advance further creating its solid base so that it graduates as a developed country from the developing one. âWe are working towards that goal.â

She said that COVID-19 pandemic, Russia-Ukraine war, US and European sanctions have put Bangladesh in deep trouble.

She mentioned that prices of essentials have increased as Bangladesh has to buy commodities like edible oil, fuel oil, wheat, corn and lentils from abroad.

âThe transportation cost has increased too. So we are facing problems. But we are not sitting idle. I have already urged all not to leave behind one inch of land with cultivation to ease the sufferings of the people and avert the economic recession,â she said.

The prime minister said that the government is taking appropriate steps to overcome the war related problems that have caused suffering to the whole world.

Briefly describing various measures taken for the freedom fighters and their families she said that no one will ever look at them with disrespect and negligence.

She said that the government found out the FFs who suffered negligence and is now taking all out measures to ensure that they get facilities such FF allowance. She said her government has increased the allowances for FFs and it will continue from generation to generation.

âItâs our duty to work for those who had taken up arms responding to the call of my father Bangabandhu Sheikh Mujibur Rahman to make the country independent,â she added.

She mentioned that there might be different ideologies among the FFs, but the AL government didnât undermine their contribution.

"We are working to preserve the memories of the War of Liberation,â she said.

She said that if the young generation knows the history of victory through the memorials of the War of Liberation, they will be inspired to work still harder for the nation.

To this end, she said the government is establishing Muktijoddha Complex in each Upazila and has also taken measures to preserve the historic Suhrawardy Udyan where Bangabandhu had delivered his historic 7 March speech, issued directives to govern the country after the independence and Pakistani occupation forces surrendered.