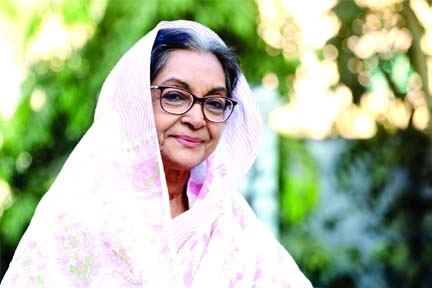 Sheikh Arif Bulbon :
Ekushey Padak recipient veteran actress Dilara Zaman starrerÂ
government granted movie is 'Omar Faruk er Maa.'
Premier show of the movie will be held at National Film Achieve in the capitalâs Agargaon area on December 3. This was confirmed by director of the movie, M A Zahidur Rahman (Zahidur Rahman Biplob) on Monday.
Dilara Zaman played the title role in the movie. As a director, Zahidur Rahman got Tk10 lakh as grant from the government for making this movie. Then director himself had to invest money for making the movie. From that point of view, director is also producer of this movie. Main story of the movie was also written by director himself. Masum Reza wrote script of the movie, said the director.
While talking about story of the movie, its director Biplob informed that basically story of the drama revolves with martyred freedom-fighter of Pirojpur, Omar Farukâs mother.
Director strongly believed that audience will find a real mother of Omar Faruk in Dilara Zaman in the movie.
Besides Dilara Zaman, Khairul Alam Sabuj, Naznin Chumki, Shahed Sharif Khan, Kazi Razu, Sayeed Babu, among others, acted in various roles in the movie.
While talking about acting in the movie, actress Dilara Zaman told this correspondent, âWhen I knew Omar Farukâs mother is alive, I went to Pirojpur to meet her. Omar Farukâs mother cannot talk now. She touched me frequently. That memory is still dazzling on my eyes. When I acted in the movie, tears automatically came into my eyes most of the time. During shooting, I was crying in front of the camera and rest of others of the unit were also crying backside of the camera. Director gave huge efforts to make the movie. I pray for him.âÂ Â