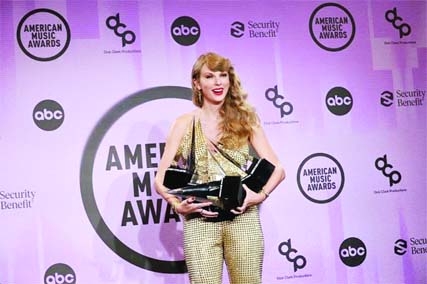 Pop superstar Taylor Swift dominated the American Music Awards on Sunday, winning six awards she was nominated for, including the most prestigious Artiste of the Year at the worldâs largest fan-voted ceremony.
The Anti-Hero singer thanked voters for supporting her after releasing four original albums and two re-recordings in the last three years.
âI cannot express how unbelievable it is to me that I still do this and that you still care,â she said on stage at the awards show in Los Angeles.
In the Artiste of the Year category, the 32-year-old singer triumphed over formidable names including Beyonce, Harry Styles, The Weeknd, Drake, Adele and Bad Bunny.
Earlier, Swiftâs re-recording of her 2012 record, Red, took the trophies for Favourite Pop Album and Favourite Country Album.
She has been making new versions of albums from her past after a dispute with her former record label.
âI cannot tell you how much my re-recorded albums mean to me, but I never expected or assumed theyâd mean anything to you,â the singer said.
Swift also won Favourite Music Video for All Too Well: The Short Film, Favourite Female Pop Artiste and Favourite Female Country Artiste. She did not mention last weekâs controversy over Ticketmasterâs sales for her upcoming tour, which were filled with glitches and prompted the company to apologise to her. American singer Pink opened the awards show dancing and singing on roller skates to her upbeat song Never Gonna Not Dance Again. Comedian and host Wayne Brady rapped in his monologue. Singer Dove Cameron, a former Disney Channel actress who reached the Billboard charts this year with the pop single Boyfriend, earned the first trophy of the night with her Best New Artiste win.
K-pop sensation BTS won Favourite Duo or Group for the fourth straight year and bagged the inaugural Favourite K-Pop Artiste award. Â Â Â  -Agency