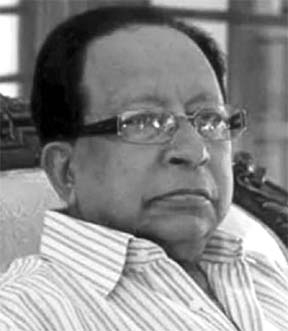 News DeskÂ  :
Shah Muhammad Abul Hussain, former state minister for Finance and Planning, died at a hospital in Dhaka on Monday. He was 85.
Abul Hussain, also a former vice-president of Barishal North unit BNP, breathed his last at Evercare Hospital at 11 am, said BNP's media cell member Sayrul Kabir Khan.
The BNP leader was survived by his wife, one son, two daughters, grandchildren and many
well-wishers to mourn his death.
His Namaz-e-Janaza was held at Gulshan Azad Mosque after Maghrib prayers.
Political leaders, representatives of socio-cultural and professional organisations took part in the janaza.
He was buried at Banani Graveyard in the capital.
Abul Hussain was elected a Member of Parliament (MP) from the Barishal-4 Constituency (Hizla and Mehendiganj) in the June 1996 general elections.Â  He was also re-elected MP in the elections in 2001.
He served as the state minister of Finance and Planning during the Khaleda Zia's second Cabinet.