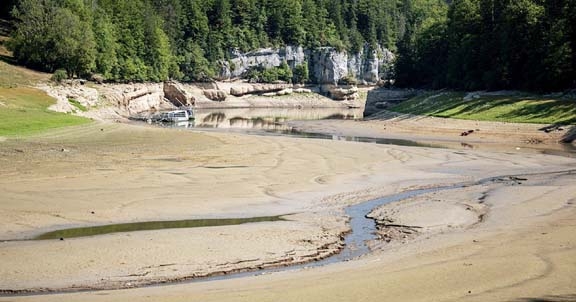 File Photo: The dry bed of Brenets Lake (Lac des Brenets), part of the Doubs River, a natural border between eastern France and western Switzerland, as much of Europe bakes in a third heatwave since June on August 4, 2022 Agency photo

Reuters :
Three successive heatwaves and Covid-19 are likely to have caused more than 10,000 additional deaths in France during this summer, the health ministry said.
A total of 10,420 excess deaths were registered between June 1 and September 15 in France's second hottest summer since 1900, data from the public health agency showed.
Of those, 2,816 took place during three episodes of heatwave alert, from June 14 to 22, July 9 to 27 and July 29 to August14.
Auvergne-RhÃ´ne-Alpes, Nouvelle Aquitaine, Occitanie, and Provence-Alpes-CÃ´te d'Azur recorded the majority of the excess national deaths during the heatwave.
The elderly were the worst affected, with those aged 75 or more accounting for 2,272 of the 2,816 excess deaths during the heatwaves.
The Covid pandemic is also likely to have played a role in heat-related deaths, said the agency, Sante Publique France, with 894 Covid-19 related deaths recorded in hospitals and medical establishments during the heatwave episodes.
"Covid-19 may have increased the vulnerability to heat of some people and exposure to high temperatures may have worsened the health of some Covid-19 patients," it added.
A blistering heatwave is baking the western United States, the latest to blast the northern hemisphere in a summer that has brought extreme temperatures across Europe, Asia and North America.
Climatologists say the kiln-like conditions in California, Nevada and Arizona are caused by a heat dome - a huge bubble of stationary high pressure that is trapping ever-hotter air.
And, they say, human-caused climate change is making these oppressive heatwaves worse - hotter, longer and more frequent.
Anyone suffering through sultry nights and sweltering days knows they are in a heatwave, but there are a few technical definitions.
The one the US government chooses is: at least two consecutive days when the minimum temperature for the area is hotter than 85% of July and August days in the same area, based on historical averages.
That minimum usually comes at night, which is important - after a very hot day, our bodies tend to cool off at night. But if the temperature remains elevated, that is much harder. This is when people get ill.
It is also important to localize the definition. People accustomed to 85 Fahrenheit (29 Celsius) days are likely not fazed by 90 degrees. But if you live in a chilly, damp spot and the mercury hits 90, you will find it much harder to cope.
Generally it is an area of high pressure that parks itself in one spot, forming a heat dome - imagine a huge greenhouse that lets in the sun's heat, but will not let any air flow through.
The high pressure prevents clouds from forming as it pushes air downwards, compressing and heating the air - think of how a tire gets hot as you pump more air in.