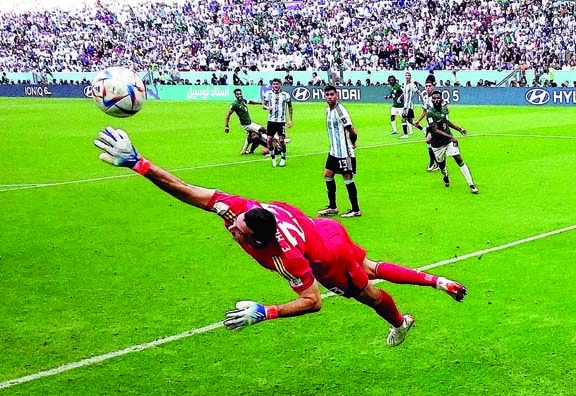 A rocket strike from Saudi Arabia\'s Salem Al-Dawsari sends the ball flying into the top corner beyond the grasp of Argentina\'s Emiliano Martinez during the 2022 FIFA World Cup Group C match at Lusail Stadium, Qatar on Tuesday. Agency photo

Sports Desk :
In one of the greatest World Cup upsets in history, Saudi Arabia beat title favourites Argentina 2-1 at the Lusail Stadium in Doha on Tuesday.
Brilliant second-half goals from Al Sehri (48th minute) and Al Dawsari (51st minute) gave the Saudis their biggest-ever victory in World Cup.
Lionel Messi's first-half goal from a penalty went in vain as Argentina surprisingly failed to match Saudi Arabia's aggression and possession-based football.
Messi gave Argentina a 1-0 lead after netting in from the penalty spot in the 10th minute of the game but Saudi Arabia bounced back with two quick goals in the second half as Saleh Alshehri scored in the 48th minute, while few moments later in the 53rd minute, Al Dawsari displayed a brilliant piece of skill as he plucked the ball out of the sky near the left corner of the box, twisted and turned, before bending a shot into the far top corner to give Saudi Arabia a goal lead.
Despite numerous attempts to bounce back, Argentina failed to find the net in the second half and suffered a defeat in their opening game, which can also be dubbed as one of the major upsets in the history of the tournament.
Argentina pressed on for an equaliser in the second half and coach Lionel Scaloni even made four changes.
But the resolute Saudis thwarted every attempt to complete an unforgettable victory in front of their roaring fans at the 80,000-capacity Lusail Stadium.
This was also only the fifth time Saudi Arabia have scored two goals in a World Cup game. Saudi Arabia's previous win over a top team came in the 1994 World Cup when the beat Belgium 1-0.
Besides, the loss also ended Argentina's 36-game unbeaten run.
Argentina now must earn at least four points from their remaining group games against Poland and Mexico to reach the round of 16 in this FIFA World Cup.