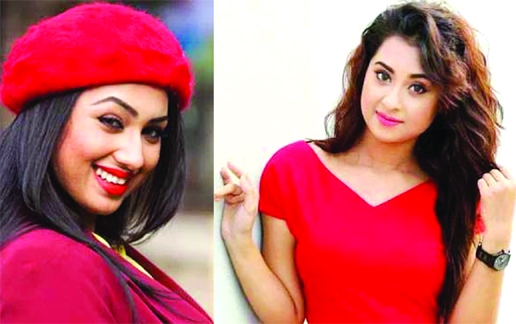 Entertainment ReportÂ  :
Dhallywoodâs two popular actresses, Apu Biswas and Shobnom Yesmin Bubly, who have tried to maintain
distance from each other, have declared âopen warâ against each
other on social media. Without openly
naming their âopponent,â both actresses have taken silent digs at each other with their enigmatic Facebook posts.
On Tuesday, Apu Biswas shared news about Shakib Khan gifting Bubly a diamond nosepin on her birthday. The actress captioned the post with several laughing emojis and poked fun at Bubly with a witty reply: âMan! This is so funny.â
In reply, Shobnom Bubly retorted on Facebook with a sly remark about the actress. The caption also said: âSomeone told me that a certain woman is still obsessed with me. She shared a picture of me along with my husband, and put it on her Facebook wall for everyone to see. My friend told me I should be happy as women have nothing else to do but stalk me on Facebook. Hahaha!! This is so much fun.â Shakib and Bubly have been in the news ever since the actress has come out in the open about their son, Bir on Facebook. Shakib has given hints about their separation.
On the other hand, Bubly has publicly stated that everything is alright and that they are still together.