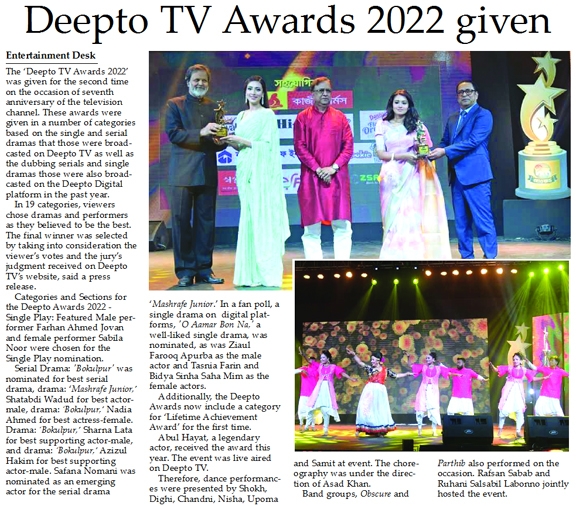 Entertainment Desk :
The âDeepto TV Awards 2022â was given for the second time on the occasion of seventh anniversary of the television channel. These awards were given in a number of categories based on the single and serial dramas that those were broadcasted on Deepto TV as well as the dubbing serials and single dramas those were also broadcasted on the Deepto Digital platform in the past year.
In 19 categories, viewers chose dramas and performers as they believed to be the best. The final winner was selected by taking into consideration the viewerâs votes and the juryâs judgment received on Deepto TVâs website, said a press release.
Categories and Sections for the Deepto Awards 2022 - Single Play: Featured Male performer Farhan Ahmed Jovan and female performer Sabila Noor were chosen for the Single Play nomination.
Serial Drama: 'Bokulpur' was nominated for best serial drama, drama: âMashrafe Junior,â Shatabdi Wadud for best actor-male, drama: âBokulpur,â Nadia Ahmed for best actress-female. Drama: âBokulpur,â Sharna Lata for best supporting actor-male, and drama: âBokulpur,â Azizul Hakim for best supporting actor-male. Safana Nomani was nominated as an emerging actor for the serial drama âMashrafe Junior.â In a fan poll, a single drama onÂ  digital platforms, 'O Aamar Bon Na,' a well-liked single drama, was nominated, as was Ziaul Farooq Apurba as the male actor and Tasnia Farin and Bidya Sinha Saha Mim as the female actors.
Additionally, the Deepto Awards now include a category for âLifetime Achievement Awardâ for the first time.
Abul Hayat, a legendary actor, received the award this year. The event was live aired on Deepto TV.
Therefore, dance performances were presented by Shokh, Dighi, Chandni, Nisha, Upoma and Samit at event. The choreography was under the direction of Asad Khan.
Band groups, Obscure and Parthib also performed on the occasion. Rafsan Sabab and Ruhani Salsabil Labonno jointly hosted the event.Â Â