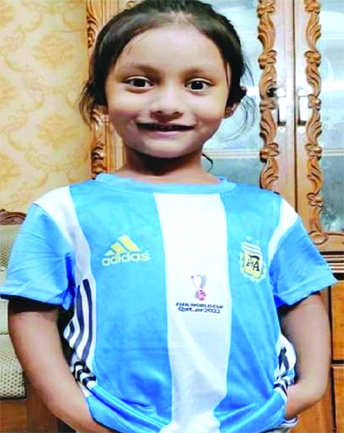 News Desk :
Police Bureau of Investigation (PBI) on Friday arrested a man for his alleged involvement in kidnapping and murdering a seven-year-old girl (Ayat) 10 days after she went missing in the city.
Illias Khan, PBI inspector in Chattogram, said that Abir Ali, an ex-tenant of the victim's family, abducted the girl on November 15 for ransom on her way to a mosque where she used to learn Arabic at Bandartila area in Chattogram, reports UNB.
Ali strangled the girl to death and later he chopped her into six pieces after taking to a residence on Akmal Ali Road in the city. He subsequently dumped the body wrapped with two bags at a beach in the city's Kattali area, the PBI officer said.
"We are trying to recover the body from the beach and seize the sharp weapons used in the killing," he said. The victim's father, Sohel Rana, lodged a general diary at the local police station after she went missing, police said.Â