No election without caretaker govt: Fakhrul 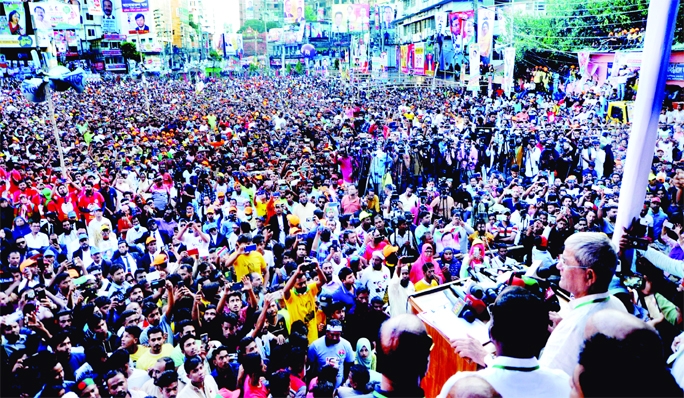 Thousands of leaders and activists of BNP and its associate bodies join the party\'s divisional rally at Cumilla Town Hall ground on Saturday.

Staff ReporterÂ  :
BNP would not take part in the next parliamentary poll without a caretaker government because it was a mockery to hold an election with the current prime minister in power, said the partyâs secretary general Fakhrul Islam Alamgir.
He said this while addressing BNPâs divisional rally on Cumilla Town Hall premises on Saturday, Fakhrul Islam Alamgir said that the ruling party has been again hatching conspiracies to hold the same type of general election as it happened in 2014 and 2018.
"We are not going to participate in any other election without a non-partisan government. The election will be held under a caretaker government. You will remain ministers and prime minister during election and arrange for election. Is it a mockery?" he added.
Quoting different ministers' statements about the caretaker government, he told the rally: "If Awami League takes part in election under a caretaker government, will they be able to keep their security deposit? Listen; there is no scope to play with these common people anymore."
Regarding the voting rights, he said, "Once we fought for independence in 1971. Again we are fighting for voting rights. We will wage another war against those who rigged votes and stole blankets."
He further said, "We are holding peaceful rallies with people for voting rights and protecting democracy. The government is filing fabricated cases against the leaders and workers across the country."
"Awami League attacks us with questions of arson attack. But they themselves commit arson attack and file false cases against us," he added.
About the price hike of daily essentials, Mirza Fakhrul said, "Now people say that they would not have boarded the broken boat, if they had known about it earlier. Now they are paying the price for it. The prices of every item like rice, lentil, oil, onion are soaring. This government has looted the dream of the people. Now people have come to the street in protest of it."
Regarding the foreign reserve, he said, "The government says - have we chewed the reserve? We will say - you have gobbled it up. Your ministers have swallowed it. They are erecting a 20-storey building from the previous 10-storey building. But what about the country?"
About the venue for the grand rally in the capital on December 10, BNP Secretary General said, "The government wanted to send us to Purbachal. Then they said - it is Suhrawardy Uddyan. We want to say - the December 10 rally will be held in Naya Paltan only. All accounts will be dealt on highways."
Criticising the government for the killing of BNP's leaders and workers, he said, "All crimes including enforced disappearance, killing, murder and repression will be tried on the soil of Bangladesh. People of this country will hold the trial."
He said that people of the country wanted to see the resignation of the government. "Resign when you have time. Otherwise, people will bid you farewell."
Ensuring the inhabitants of Cumilla, he said that BNP will announce Cumilla as a division if they go to power.
Earlier, BNP leaders and workers from other districts and adjacent areas began to swarm at the venue with small processions and chanting slogans. The entire Town Hall area was covered with banners, festoons and placards with photos of BNP's founder Ziaur Rahman and current Chairperson Khaleda Zia.
BNP also alleged that the mobile internet speed was slow around the venue since morning in order to prevent them from live broadcast on different platforms including social media.
It was the eights rally in Cumilla where tens of thousands of BNP workers and leaders assembled to make the rally the voice of the people to stand against the government.
Addressing the rally, BNP Standing Committee Member Khandkar Mosharraf Hossain said, "The government has destroyed the country's economy through looting. The middle income group of people has become poorer."
"The government is pushing the country on the verge of destruction only to stay in power. As they have killed democracy, they could not restore it. The government has destroyed the economy and they have failed to recover it. So people do not want to see them in power," he added.
About the announcement during the BNP rally in the capital in December, he said, "We hope people will join our movement when we announce the programme for toppling the government."
Another Standing Committee Member Mirza Abbas said, "People are ready to respond to all conspiracies of the government. People have stood up. They are ready to face any consequences."
BNP earlier held rallies in Chattogram, Mymensingh, Khulna, Barishal, Faridpur, Sylhet and Rangpur cities. The next rally will be held in Rajshahi on Dec 3 and the final one will be held in the capital on December 10 with fresh announcement.