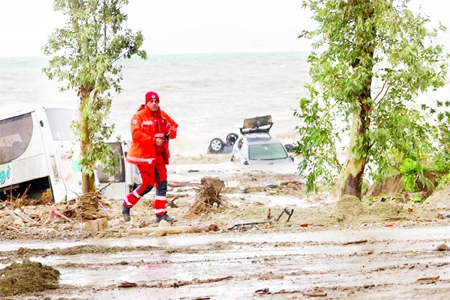 Damaged cars slid into the sea following a landslide on the Italian holiday island of Ischia, on Saturday.

Al JazeeraÂ  :
A landslide triggered by heavy rains on the Italian holiday island of Ischia has dragged cars into the sea, caused houses to collapse, left dozens stranded and several missing.
There were deaths feared, but government ministers contradicted themselves over a possible death toll.
Speaking from the firefighters' emergency coordination centre, interior minister Matteo Piantedosi said on Saturday that no deaths had been confirmed.
"At the moment there are no confirmed deaths, there are some difficulties in the rescue operations because the weather conditions are still challenging," Piantedosi told reporters in Rome.
However, Infrastructure Minister and Deputy Prime Minister Matteo Salvini said earlier that eight people had been killed.
The fire service tweeted that a storm that started at 04:00 GMT caused flooding and landslides on Ischia, a volcanic island in the Tyrrhenian Sea about 30km (19 miles) off Naples in the south of the country.
Ferries to and from Ischia were suspended. The island is famous for its hot springs and is popular with Italian and foreign tourists.
"Searches are under way for any missing people," in Casamicciola Terme, one of six small towns on the island, the fire service said.
The mud dragged cars and buses downhill, with at least one vehicle swept into the sea. Two people were rescued from the vehicle, it tweeted.
Rescue workers were experiencing difficulties in reaching the island via motorboats and helicopters from Naples because of the bad weather.
Officials in charge of the Naples region, which includes Ischia,
said at least 12 people were missing.
Italian news agency ANSA reported that 10 buildings had collapsed.
Meanwhile, the mayor urged residents to stay home and 100 people were stranded in isolated parts of the island.
Photos and broadcast images showed people gathering their belonging from homes soaked with water and mud.
Casamicciola Terme was hit by an earthquake in 2017, in which two people died.