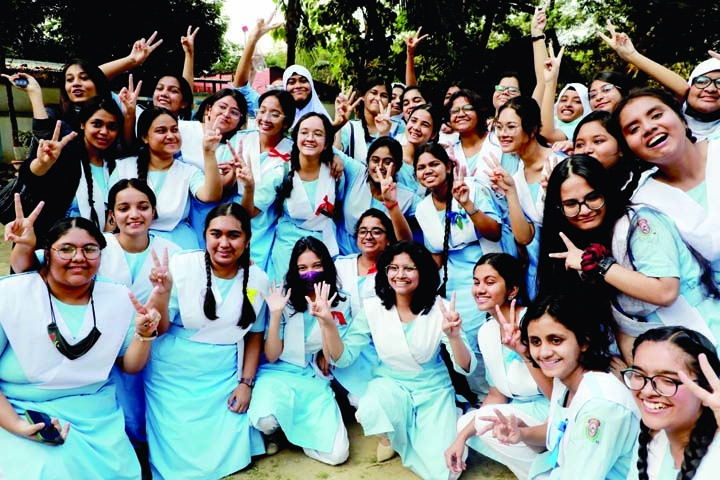 Staff ReporterÂ  :
Girls have outshined boys in terms of pass rate and GPA-5 in the Secondary School Certificate (SSC) and equivalent examinations this year when the total pass rate is 87.44 per cent.
Compared with the pass rate of last year's result 93.58 per cent, this year it has dropped by 6.14 per cent.
However, the number of GPA 5 holding students has increased this year compared with last two years. This year, it is 269,602 while it was 183,340 last year and 135,898 in 2020.
On the other hand, no students from 50 educational institutions pass this year and this figure was only 18 last year.
In addition, the number of educational institutions which make 100 per cent pass rate every year has also been dropped this year compared with the last year. This year the figure is 2,975 when it was 5,494 last year.
Education Minister Dr Dipu Moni read out the results of SSC and equivalent examinations on Monday at a press conference held at International Mother Language Institute in the capital.
She said that a total of 1,994,139 students from 29,591 educational institutions took part in the examinations of SSC, Dakhil and SSC (vocational) at 3,789 centres. Of them, 1,743,619 examinees came out successful with a percentage of 87.44 per cent.
Moreover, a total of 348 students of eight foreign centres came out successful in the SSC examinations with pass rate 95.87 per cent.
The Minister also said that the number of GPA-5 holders under 11 education boards was 269,602. Last year the total GPA-5 was 183,340.
Analyzing the results, the female students outdid their counterparts in terms of pass rate and GPA-5.
A total of 995,944 girls took part in the exams and passed 873,573 with the pass rate 87.71 per cent while out of 998,193 boys, 870,046 passed and the pass rate is 87.16 per cent.
On the other hand, 148,446 girls and 121,156 boys secured GPA-5.
Under the nine general education boards, a total of 1,588,657 students participated in the SSC examination with an average pass rate 88.10 percent.
The average pass rate under the Madrasa education board was 82.22 percent and the GPA-5 was 15,457.
The Technical education board topped all other education boards in terms of pass rate. The pass rate of this board was 89.55 per cent and the GPA-5 was 4,751.
As many as 64,984 students from Dhaka board got GPA-5, while the pass rate stands at 90.03 per cent.
Under Sylhet Board, 78.82 per cent students have passed this year. However, it is 18 per cent lower than last year. Despite the decrease in the pass rate, number of GPA-5 has increased by 2,371 this time.
The pass rate in Barishal board stands at 89.61 per cent, while 10,068 students secured GPA-5, while in Mymensingh Board the pass rate has decreased this year but the number of GPA-5 has increased. The pass rate is 89.02 while GPA-5 is 15,216.
The pass rate of Jashore Board is 95.1 per cent, Rajshahi board 85.88 per cent which is lowest in last seven years, Cumilla board 91.28 per cent, Chattogram 87.33 per cent, Barishal 87.96 per cent and Dinajpur 80.77 per cent.
Earlier, Education Minister Dr Dipu Moni handed over the summary of the results of the SSC and equivalent examinations to Prime Minister Sheikh Hasina who unveiled the results through videoconferencing from Ganabhaban on Monday.
About the increase of GPA-5, the Education Minister said, "The examinees got much time for exam preparation about two and a half years. Besides, the syllabus was short. All these matters helped them to score good results."
Regarding the zero pass educational institutions, she said, "We look into the matter and take steps accordingly."
SSC and equivalent exams started on September 15 after being delayed for a long time due to the pandemic and recurrent floods. Usually, the result is published within 60 days of the completion of the examination.