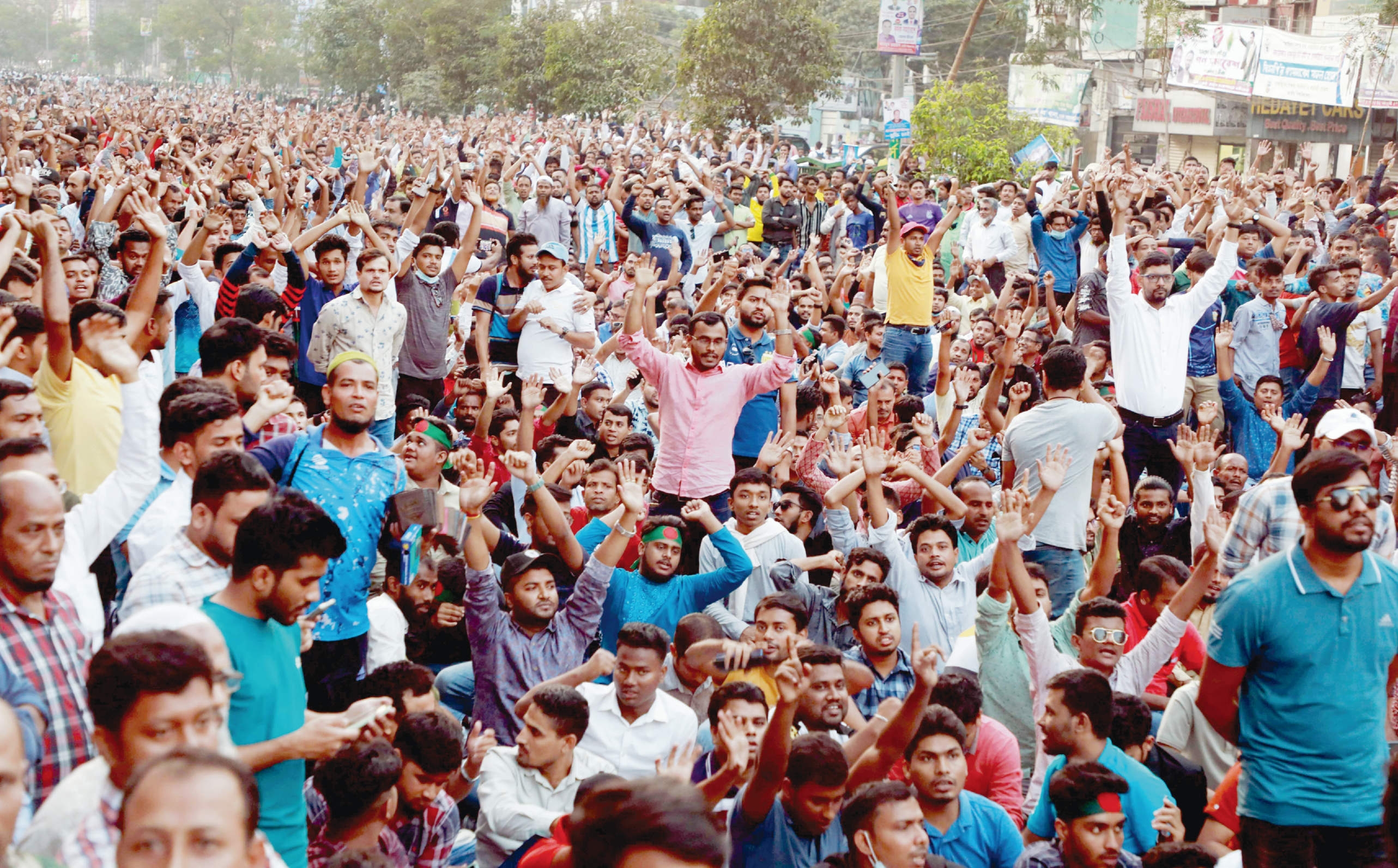 Thousands of leaders and activists of Bangladesh Nationalist Party (BNP) stage a protest rally in city\'s Naya Paltan area on Wednesday against the torture and arrest of police. NN photo

Staff Reporter:
With the passing of every day, the political landscape is being intensified with hitting arguments centering the BNP's rally in the capital on December 10 as political parties as well as general people are talking about what would be the next political direction after it.
The two big parties -- ruling Awami League and Bangladesh Nationalist Party (BNP) -- are exchanging a volley of arguments with points and counterpoints about BNP's upcoming Dhaka rally and the venue. Â
Awami League said that BNP would get permission to hold the rally at Suhrawardy Uddyan and Police had given permission tagging 26 conditions.
On the other hand, BNP is adamant to its choice of venue at the Naya Paltan which is the location of their party headquarters.
Meanwhile, Awami Leagues's General Secretary and Road Transport and Bridges Minister Obaidul Quader in a briefing at the Secretariat on Wednesday raised questions as to why BNP has selected the date December 10 to hold its rally. Even he said that Awami League along with people will give an appropriate answer if BNP is engaged in any sort of violence in the name of a rally on December 10.
"Has BNP forgotten the history of what happened on December 10? The process of implementing the blueprint of killing the intellectuals on that day began. The question is why BNP has selected December 10," he added.
When such arguments are hitting the grounds, another speculation is also being circulated in the political arena as to the participation of convicted BNP Chairperson Khaleda Zia in the December 10 rally.
She is now on bail under certain conditions and staying in her Gulshan residence in the capital following her release from jail on March 25, 2020 as she was convicted for 10 years imprisonment in the corruption case.
Following the speculation, Home Minister Asaduzzaman Khan Kamal at an annual training programme of Bangladesh Police Women Network in Dhaka's Rajarbagh area on Wednesday said, "She is out of jail on certain conditions. If she joins the public rally, the court will go by the book."Â  In reply to a query of BNP's demand for Naya Paltan to hold their rally, he said, "BNP sought permission for two places -- Suhrawardy Uddyan and Manik Mia Avenue. Considering their demand, they have been given permission for Suhrawardy Uddyan where they can hold the rally amid a "good environment".
Awami League said that the government has also taken sorts of initiatives so that BNP can hold their rally on Suhrawardy Uddyan to relieve people from sufferings. They have changed the date of the Chhatra League conference on the Uddyan to pave the path for BNP.
On the other hand, BNP Secretary General Mirza Fakhrul Islam Alamgir recently said that their rally would be held peacefully only on Naya Paltan.
BNP said that the government has different motives behind giving permission for the Suhrawardy Uddyan.
On Tuesday, BNP Senior Joint Secretary General Ruhul Kabir Rizvi told the journalists that they would hold the rally before the party headquarters at Naya Paltan.
"We have received a DMP letter with permission at Suhrawardy Uddyan. But we will hold our rally before party headquarters braving all hurdles," he added.
Before the December 10 rally, BNP would hold its penultimate divisional rally in Rajshahi on December 3.
Rajshahi Metropolitan Police in a letter on Wednesday gave permission for the rally with eight conditions -- limiting rally activities within the boundary of Madrasa ground, no gathering on the adjacent roads of the venue, no interruption of vehicular movement, installing body checking machines and arrangement of volunteers with visible ID cards under own management.
The other conditions are -- no sticks, rods can be carried by supporters; no anti-state statements or activities; no processions to join the rally; no provocative speech or leaflets; no use of loudspeakers during the sensitive time for Azan, prayers and other religious rites; no use of caricatures and words that may hurt religious sentiments; installation of high resolution CCTV; no entry of vehicles inside the town or parking on main roads; and none can stay or enter into the venue except those who will erect the stage before the date of the rally.
Meanwhile, Rajshahi Divisional Transport Owners Association announced strike from 6:00am on Thursday ahead of BNP rally there to stop plying of three-wheelers on main road.
The Association, however, claimed that it was 'coincidental' and it has no connection with the congregation, but BNP said that the strike was meant for stopping their leaders and workers to join the rally spontaneously.
On the other hand, BNP Organising Secretary of Rajshahi Division Ruhul Kuddus Talukder in a press conference at its party office on Wednesday said that police have arrested some 53 BNP leaders and workers in 'fabricated' cases ahead of the rally.
"Some over-curious police are arresting our leaders and workers ahead of the rally. Some 53 BNP men were arrested from different districts including Rajshahi, Chapainawabganj, Sirajganj and Joypurhat on Tuesday night. It has created a sense of fear in the area," he added.
He further said that the rally could not be stopped by threats, cases or obstructions. Meanwhile, BNP leaders and activists have already started reaching Rajshahi before the rally in huge numbers.