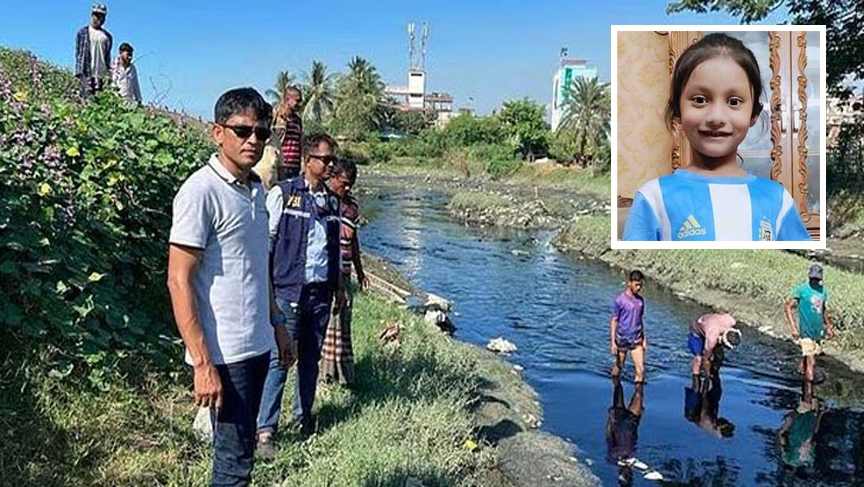 Police have found the severed head of Alina Islam Ayat, a five-year-old girl who was killed after being abducted for ransom in Chattogram.

It was wrapped in a packet found near the Akbar Ali pier in the port city on Thursday, said PBI Inspector Ilias Khan. The law enforcers recovered Alinaâs severed legs nearby on Wednesday, reports bdnews24.com.

Alina was the daughter of Noyarhat resident Sohel Rana. Abir Ali, 20, who allegedly cut the victim's body into six pieces and threw them into the sea after strangling her, had been living with the family as a tenant in Sohelâs house.

Alina went missing on Nov 14 after she left home to study Arabic at a local mosque. The family filed a general diary with EPZ police and requested the PBI to find her.

The PBI detained Abir for questioning after CCTV camera footage showed he took the child into his home but Alina was never seen coming out.

During the interrogation, Abir admitted his role in the murder and said he cut Alinaâs body into six pieces and disposed of them in packets at different places. Her head and legs were dumped in the water body near the sluice gate area and the other parts of the body were thrown into the sea, the PBI officer said citing the suspect.

Abir decided to kill Alina as it became difficult to detain her. He had found a SIM card on the street and planned to use it to demand a ransom from the child's family, but he could not contact them as the SIM card was out of service, the PBI had previously said after the suspectâs arrest.

Police found Alinaâs shoes and a kitchen knife used in the murder after conducting raids at different places taking the suspect with them. The victimâs father started a murder case with EPZ police afterwards.

The PBI got two days to grill Abir on Saturday and raided different places, taking the suspect with them. The investigation wing of the police took Abir in for questioning in their custody for seven days again on Monday. His parents and sister were arrested on that day as well and taken into police custody for three days.