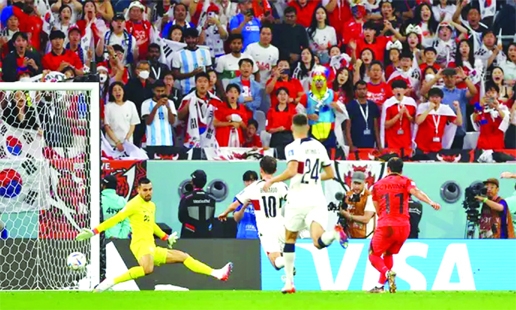 South Korea\'s Hwang Hee-chan scoring their second goal against Portugal in their Group H match of the FIFA World Cup at Education City Stadium in Qatar on Friday.

Sports Desk :
Portugal found the goal after only 5 minutes thanks to Ricardo Horta. South Korea managed to tie the game with Kim Young-gwon. Right at the last breath, Hwang Hee-chan scored the second goal and made it 2-1 at Education City Stadium in Qatar on Friday.. This meant that Portugal qualified in pole position for the round of 16, and South Korea passed in second position.
Portugal was already ahead. Ricardo Horta was in the right place at the right moment and simply

Â sent the ball in from inside the box.
South Korea had tied the game, but it was later disallowed due to offside.
Kim Young-gwon scored for South Korea to make it 1-1. Cristiano Ronaldo hit the ball with his back inside the box, and the South Korean defender exploited his mistake to score.
Portugal almost regained the advantage. Vitinha tried a great shot from the distance, which was saved by the goalkeeper. Ronaldo tried to push the ball in after the save, but missed the target.
Son tried to score with a volley, but Cancelo blocked his shot.
Son ran for the whole field with the ball and served an incredible ball to Hwang Hee-chan who scored at the last breath to bring his national team to the knockout stage.