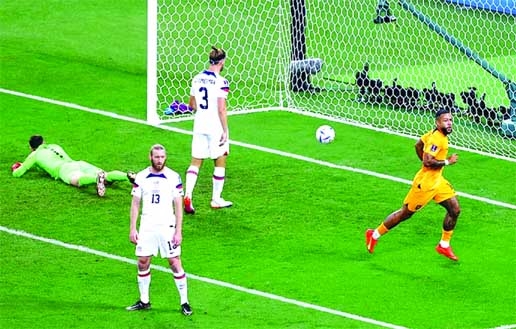 Reuters :
The Netherlands produced a clinical attacking performance and survived a brief scare to beat the USA 3-1 and qualify for the quarter-finals of the 2022 FIFA World Cup on Saturday.
The Netherlands were not afraid to let the USA knock the ball around to little effect in the first half, where goals from Memphis Depay and Daley Blind made the difference before the break.
The Stars and Stripes had showed signs of attacking promise and reduced the deficit through Haji Wright with 14 minutes remaining, but the dominant Denzel Dumfries struck Holland's third not long after to send the Americans home.
Amid criticism of his side's 'boring' style of play, Louis van Gaal's Netherlands side sat back and rode a wave of pressure from the USA, who took just three minutes to carve out a gilt-edged chance. Back from a pelvic injury, Christian Pulisic ghosted in behind the Dutch defence in the third minute, but his effort could only find the long legs of 6'7" goalkeeper Andries Noppert.
The Stars and Stripes would soon pay the price for not building on their explosive start, as a lightning-quick attack from the Netherlands ended with Depay slotting home from Dumfries's perfectly-placed cutback.
The sting was sapped from the USA side following Depay's opener, as Gregg Berhalter's side took fewer risks on the ball and left the Dutch defence relatively untroubled for the remainder of the first half, barring a very brief period of intent near the break.
Timothy Weah did sting the palms of Noppert with a well-struck half volley in the 43rd minute, but the Netherlands would double their lead in stoppage time through a carbon copy of Depay's opener, as Dumfries found Blind for the left-back to finish first time low into the net.
The second half started in a similarly frenetic vein to the first, and the USA were inches away from pulling one back as Tim Ream poked the ball towards goal following a corner, but Cody Gakpo was on hand to clear off the line in the 58th minute.
Matt Turner then had to be alert to prevent Walker Zimmermann from scoring an own goal after the USA defender slid to block a Netherlands cross, but the Stars and Stripes were refusing to wave the white flag.
However, the USA's futile attacking efforts were comfortably contained by the Netherlands, who could have been out of sight in the 73rd minute but saw Turner produce a brilliant double save from Teun Koopmeiners and Steven Bergwijn.
Wright had a shot cleared off the line by Dumfries just two minutes later, but the American striker would finally break the Netherlands resistance in unorthodox fashion barely 60 seconds later, flicking a cross from Pulisic over the top of a scrambling Noppert and into the side of the net.
The momentum was suddenly with the USA, but the Netherlands restored their two-goal cushion just five minutes after Wright's response, as Blind turned provider for an unmarked Dumfries to volley home with aplomb at the back post.
The Netherlands comfortably rode out the final few moments and will now meet Argentina or Australia in the quarter-finals.