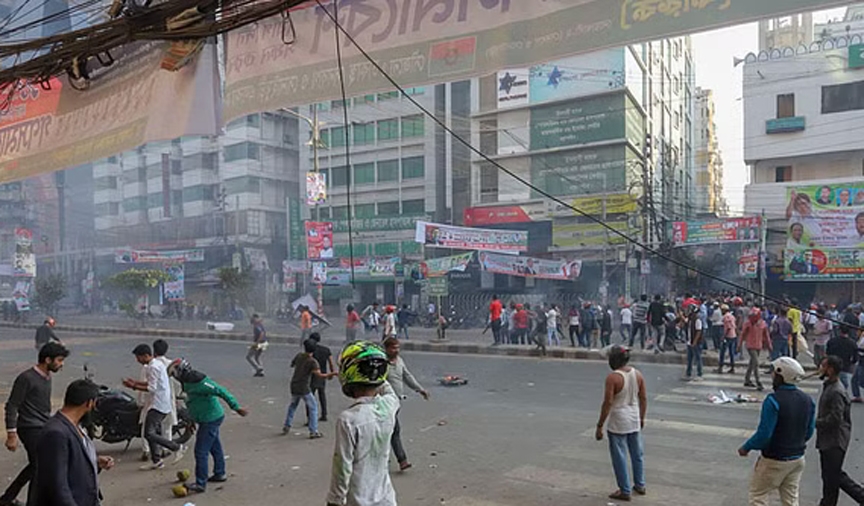 A man has died of his injuries after police clashed with BNP activists outside the partyâs headquarters in Dhakaâs Naya Paltan.

He had a bullet wound on his body, the inspector said.

Three others injured in the incident have been identified as Rony, Monir and Iqbal. They were admitted to the hospital.

Bachchu could not say whether the injured people were BNP activists.

The violence comes ahead of the partyâs divisional rally in the capital on Saturday.

Tensions ran deep surrounding the upcoming rally. On Wednesday, activists from the party began gathering at its central offices.

The activists blocked the road in front of the offices chanting slogans, witnesses said. A large number of police personnel were deployed on nearby roads as well.

Around 3 pm, the two sides clashed.

When police charged at them, BNP activists began throwing brickbats. Police then used rubber bullets and teargas shells to try and disperse the crowd.

SWAT members were seen trying to bring the situation under control.

Amid the clashes, fear has spread through the Naya Paltan area, according to a bdnews24.com correspondent at the scene.

The clashes disrupted traffic from Fakirapul to the Nightingale intersection.

The BNP activists had ducked into alleys to escape the police and continued to throw brickbats at the law enforcers. At one point, police entered the alleys and beat them.

A large number of police personnel were on the main road at Naya Paltan. Armoured police vehicles rumbled into the area as a backup force.

âActivists came to the party office to make enquiries about the Dec 10 rally,â said BNP Senior Joint Secretary General Ruhul Kabir Rizvi. âPolice have attacked a peaceful gathering without any provocation. Many fell ill because of the teargas. They detained many activists after they suffered injuries.â

BNP Secretary General Mirza Fakhrul Islam Alamgir was also present at the scene, but the clash started soon after he left.

No venue has been set for the Dec 10 rally yet, said Md Hayatul Islam Khan, deputy commissioner from the Motijheel Division of police.

Despite this, activists from the party blocked both sides of the road near its Naya Paltan headquarters on Thursday, he said.

Khan said they made several requests for the activists to leave the road, but they did not do so. When police attempted to remove them, the BNP activists began throwing brickbats at them.

That is how the clash started, he said. He added that several police personnel were injured in the incident.