Quality education for all 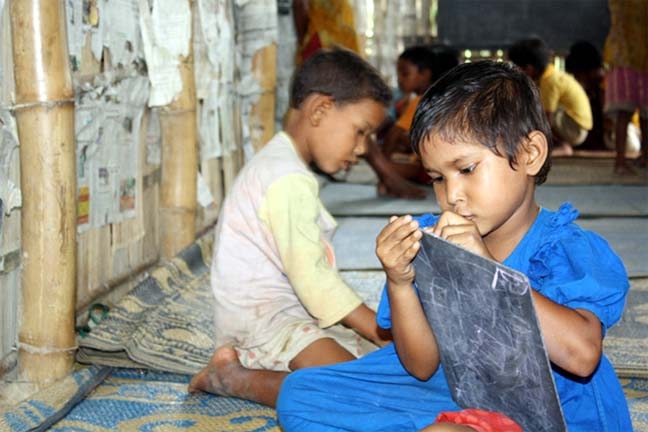 Niaz Asadullah :
THE much awaited Education for All (EFA) Global Monitoring Report 2013-14 was launched by Unesco last month. The Report entitled "Teaching and Learning: Achieving Quality for All" has rightly shifted the focus away from the issue of "access to education" to what students actually learn and teachers do in school. It not only highlights the need to address the problem of teacher shortage around the world, but also provides strategies to supply best teachers to ensure good quality education.
Some of the policy options highlighted by Unesco, such as recruiting new teachers and training existing ones, require increased budgetary allocations. With steady flow of foreign remittance and RMG export earnings, and a stable growth rate of the economy, Bangladesh is better positioned than most other developing countries to overcome the budgetary constraints facing our education sector. Despite the fiscal surplus created by macroeconomic conditions and the political rhetoric of prioritising educational investment, our education sector remains under-funded by the state. This is not helped by the fact that the share of external assistance in total education spending is already as low as 6%.
Given the lack of political commitment to education, Bangladeshi parents are paying a heavy price. Households bear a larger share of the responsibility for educational spending-the share of private expenditure in primary education is as high as 37%. This is even higher (58%) at secondary level. According to the Unesco report, the richest households spend several times as much on books as the poorest households in public lower secondary schools, and 15 times as much on private tuition as poorer households for secondary education. This in turn is worsening social inequality and increasing rural-urban gap.
Going by existing research evidence, primary school quality is very poor. Despite the popular claims based on high pass rate in public exams, the level of learning is particularly low in rural areas, even amongst children completing primary school. Results of recent primary school completion (PSC) examination also show that performance is lower in non-government primary schools. Unesco's suggestion of identifying and motivating good teachers and rewarding them can significantly boost student performance. Instead of prioritising such pragmatic measures to achieve the EFA goal to ensure quality education for all children, Bangladesh's case has been compromised by politicisation of the education sector. In order to mobilise popular support before the national election, the Awami League government announced in January 2013 that it would nationalise existing non-government primary schools and teachers. The promise of nationalisation has also been extended to non-government school teachers who have never received MPO salary subsidy.
Little thought has gone into the consequences of this policy for the quality of teaching and learning outcomes in rural Bangladesh, where parents mostly rely on non-government primary schools for children's education. The adverse effect of such political decisions on the primary education sector is evident as we look across the border. In the Indian state of Uttar Pradesh, non-government primary school teachers and their union leaders successfully campaigned for their rights, leading to security of tenure and higher pay for civil service teachers. But this campaign neglected problems of teacher absenteeism and of low quality of teaching, because of which student learning outcomes did not improve. Once the teachers became tenured, schools could do very little against non-performing teachers.
In Bangladesh, supporters of government jobs and pay for non-government primary schools ignore hard evidence on the link between teacher pay and performance. Field research on Bangladesh has confirmed that teacher absence rate is highest among highest paid staff in government as well as non-government primary schools. Without any change in teacher absenteeism, awarding government jobs to all non-government primary schools will instead make it nearly impossible to fire truant teachers. Nationalisation may additionally overburden the education budget without solving problems of teacher absenteeism and under-performance. Lastly, it may lead to a governance crisis in the education sector. At present, district and upazila education offices in rural areas are under-equipped to properly monitor government primary schools. Bringing more schools under the fold of the state without any improvement in educational governance would only make the situation worse.
The then government in the early 1970s was first to set the precedent by nationalising more than 37,000 primary schools. For a new nation, where education suffered utter neglect during the Pakistani regime, nationalisation was considered necessary to ensure greater control over schools to deliver quality services. Forty-two years after independence, our understanding of what works and what does not in educational management has evolved. At a time when countries around the world are opting for greater devolution of public services, Bangladesh can't afford to head in the opposite direction by ignoring emerging research evidence and practical experiences of other countries. The fiscal and educational challenges created by the policy announcement to nationalise the jobs of over 1 lakh teachers and employees of as many as 26,193 non-government primary schools must not be underestimated. In a country where nearly 90% of the recurring education budget goes towards teacher salary, the nationalisation scheme may also lead to a severe budget squeeze when it comes to spending on teaching and learning materials and other recurrent items such as regular maintenance of school facilities.
If Bangladesh is to take this year's Unesco report seriously and keep up with other countries that are striving to ensure quality education for all, it must make a political commitment not just by increasing budgetary allocation to the education sector but also by reversing the decision of blanket nationalisation of thousands of registered non-government schools and teachers.
(The writer is a Professor of Economics at Malaya University, Kuala Lumpur, and a Fellow of the Royal Society of Arts. E-mail: [email protected])